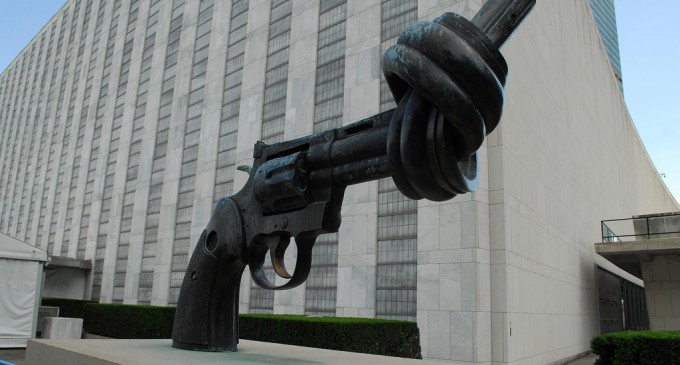 President Obama and his European colleagues released a joint statement reaffirming their common commitment to civilian disarmament as outlined in the United Nation’s Arms Trade Treaty (ATT) at the end of the US/EU Summit held this year in Brussels.

Paragraph 33 of the declaration that was released on March 26 states: “We reaffirm our joint commitments on non-proliferation, disarmament and arms control.”

President Obama and his communist buddies also promised: “We will also work together to promote the entry into force of the Arms Trade Treaty in 2014.”

Of course, the media primarily covered the Crimea side of their discussions, not their gun-control agenda.

Obama has quietly signed his name to a document that amounts to nothing less than the de facto repeal of our Second Amendment.

Are you prepared for the next American Revolution, coming to your town soon?

At the conclusion of the U.S.-EU Summit held this week in Brussels, President Obama and his European colleagues released a joint statement reaffirming their common commitment to civilian disarmament as mandated in the United Nation’s Arms Trade Treaty (ATT).

While globalist and establishment media reports focus on the summit’s attention to the events in Crimea, there is a provision at the end of the statement that is of much greater concern to Americans aware of the crescendo of calls for restrictions on the right to keep and bear arms.

Paragraph 33 of the declaration released on March 26 states: “We reaffirm our joint commitments on non-proliferation, disarmament and arms control.”

Among other agreements, President Obama, in the name of the United States, joined with the gathered heads of state in promising: “We will also work together to promote the entry into force of the Arms Trade Treaty in 2014.”

Despite significant congressional opposition to the United Nation’s attempt to confiscate privately owned weapons and ammunition, President Obama quietly signed his name to a document that if carried out, would amount to nothing less than the de facto repeal of the Second Amendment.

In order to appreciate the seriousness of the the Arms Trade Treaty’s threat to the God-given right to keep and bear arms and to the constitutional protection of that right, details of the plan should be understood.

This author attended the negotiations at UN headquarters in Manhattan where the ATT was hammered out, and I found that the ATT is so offensive to the preservation of the right to keep and bear arms, it is an understatement to call it unconstitutional. As The New American has reported, several provisions of this treaty significantly diminish the scope of this basic right.

First, the Arms Trade Treaty grants a monopoly over all weaponry in the hands of the very entity (government) responsible for over 300 million murders in the 20th century.

One uncomfortable fact of armed violence ignored by the UN in its pro-disarmament propaganda is that all the murders committed by all the serial killers in history don’t amount to a fraction of the brutal killings committed by “authorized state parties” using the very weapons over which they will exercise absolute control under the terms of the Arms Trade Treaty.

Article 2 of the treaty defines the scope of the treaty’s prohibitions. The right to own, buy, sell, trade, or transfer all means of armed resistance, including handguns, is denied to civilians by this section of the Arms Trade Treaty.

Article 3 places the “ammunition/munitions fired, launched or delivered by the conventional arms covered under Article 2” within the scope of the treaty’s prohibitions, as well.

Article 4 rounds out the regulations, also placing all “parts and components” of weapons within the scheme.

Perhaps the most immediate threat to the rights of gun owners in the Arms Trade Treaty is found in Article 5. Under the title of “General Implementation,” Article 5 mandates that all countries participating in the treaty “shall establish and maintain a national control system, including a national control list.”

This list should “apply the provisions of this Treaty to the broadest range of conventional arms.”

Article 12 adds to the record-keeping requirement, mandating that the list include “the quantity, value, model/type, authorized international transfers of conventional arms,” as well as the identity of the “end users” of these items.

In very clear terms, ratification of the Arms Trade Treaty by the United States would require that the U.S. government force gun owners to add their names to the national registry. Citizens would be required to report the amount and type of all firearms and ammunition they possess.

Section 4 of Article 12 of the treaty requires that the list be kept for at least 10 years.

Finally, the agreement demands that national governments take “appropriate measures” to enforce the terms of the treaty, including civilian disarmament. If these countries can’t get this done on their own, however, Article 16 provides for UN assistance, specifically including help with the enforcement of “stockpile management, disarmament, demobilization and reintegration programmes.”

In fact, a “voluntary trust fund” will be established to assist those countries that need help from UN peacekeepers or other regional forces to disarm their citizens.

While President Obama has kept mostly mum lately on the ATT, especially in the face of such strident congressional opposition, the European Union has come right out and called for the enactment of the globalist gun grab.

On February 5, the European Parliament voted to authorize EU countries to ratify the ATT.

In a less-than-enthusiastic press release, the European Parliament declared that the Arms Trade Treaty “wouldn’t necessarily result in the reduction of arms production, but it should stop arms getting into the hands of terrorists and should stop arms flooding into areas that are unstable.”

That’s sounds troubling. Given the proclivity of regimes to label dissenters as “terrorists” and to nominate the United States as a battlefield in the global “War on Terror,” however, the rights protected by the Second Amendment are most certainly under attack in the form of this globalist gun grab masquerading as a peace treaty.

David Martin, a British member of the Group of the Progressive Alliance of Socialists and Democrats who helped draft the recommendation for EU member ratification of the ATT, admitted that the aim of the treaty is control of firearms. “There are weaknesses in the treaty, but it’s nevertheless a major step forward. This is the first time that conventional weapons have been put under any sort of control at all,” Martin said in an interview with the EU press.