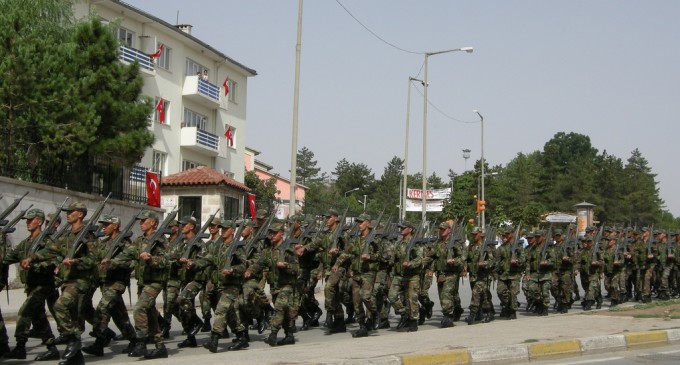 Watch this video of Turkish political and military leaders planning a false flag attack to justify a war with Syria.

False flag attack: A horrific, staged event blamed on a political enemy and used as a pretext to start a war or to enact draconian laws in the name of national security.

While false flags might seem unreal to the average person, they have been admitted by governments all over the world, including the US government, all throughout history.

For example, recently declassified documents shows us that in the 1960′s, the American Joint Chiefs of Staff signed off on a plan to blow up AMERICAN airplanes (using an elaborate plan involving switching of airplanes), and also to commit terrorist acts right here on American soil, and then to blame it on the Cubans in order to justify an invasion of Cuba.

“A history of false flag attacks used to manipulate the minds of the people! “In individuals, insanity is rare; but in groups, parties, nations, and epochs it is the rule.”
― Friedrich Nietzsche

If you think that our corrupt, increasingly socialist government isn't capable of carrying out such an event to justify taking actions they want you do indeed need to learn more about history.

Among the most damning sections:

Ahmet Davutolu: “Prime Minister said that in current conjuncture, this attack (on Suleiman Shah Tomb) must be seen as an opportunity for us.”

Hakan Fidan: “I’ll send 4 men from Syria, if that’s what it takes. I’ll make up a cause of war by ordering a missile attack on Turkey; we can also prepare an attack on Suleiman Shah Tomb if necessary.”

Feridun Sinirolu: There are some serious shifts in global and regional geopolitics. It now can spread to other places. You said it yourself today, and others agreed… We’re headed to a different game now. We should be able to see those. That ISIL and all that jazz, all those organizations are extremely open to manipulation. Having a region made up of organizations of similar nature will constitute a vital security risk for us. And when we first went into Northern Iraq, there was always the risk of PKK blowing up the place. If we thoroughly consider the risks and substantiate… As the general just said…

Yaar Güler: Sir, when you were inside a moment ago, we were discussing just that. Openly. I mean, armed forces are a “tool” necessary for you in every turn.

Ahmet Davutolu: Of course. I always tell the Prime Minister, in your absence, the same thing in academic jargon, you can’t stay in those lands without hard power. Without hard power, there can be no soft power.

A full translation can be found here

And just in case you had faith that this was all made up and Erdogan is right to ban it… he just admitted it was true!

To summarize: a recording confirming a NATO-member country planned a false-flag war with Syria (where have we seen that before?) and all the Prime Minister has to say is the leak was “immoral.”

Erdogan is not amused:

Turkish Prime Minister Tayyip Erdogan described the leaking on YouTube on Thursday of a recording of top security officials discussing possible military operations in Syria as “villainous” and the government blocked access to the video-sharing site.

“They even leaked a national security meeting. This is villainous, this is dishonesty…Who are you serving by doing audio surveillance of such an important meeting?” Erdogan declared before supporters at a rally ahead of March 30 local polls that will be a key test of his support amid a corruption scandal.

In other words, the Turkish Prime Minister has admitted that the tape is authentic .. and is between top Turkish military and political leaders.

Good Morning Turkey names names as to who was involved in the discussion:

Indeed, Turkey has been sheltering and training Syrian rebels for man years, and there have been allegations for years that Turkey was instigating false flag attacks and blaming Syria.

Sadly, this is common, since governments from around the world admit they carry out false flag terror:

So Common … There’s a Name for It

This tactic is so common that it was given a name for hundreds of years ago.

“False flag terrorism” is defined as a government attacking its own people, then blaming others in order to justify going to war against the people it blames. Or as Wikipedia defines it:

False flag operations are covert operations conducted by governments, corporations, or other organizations, which are designed to appear as if they are being carried out by other entities. The name is derived from the military concept of flying false colors; that is, flying the flag of a country other than one’s own. False flag operations are not limited to war and counter-insurgency operations, and have been used in peace-time; for example, during Italy’s strategy of tension.

The term comes from the old days of wooden ships, when one ship would hang the flag of its enemy before attacking another ship in its own navy. Because the enemy’s flag, instead of the flag of the real country of the attacking ship, was hung, it was called a “false flag” attack.

Indeed, this concept is so well-accepted that rules of engagement for naval, air and land warfare all prohibit false flag attacks.