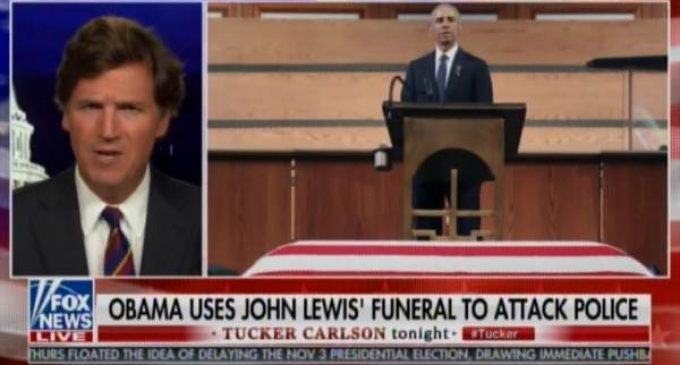 Fox News host Tucker Carlson on Thursday labeled Barack Obama as ‘greasy’ and “One of the sleaziest and most dishonest figures in history of American politics” after Obama compared US police to racist Democrat Bull Conner while delivering an oration at the funeral of civil rights icon John Lewis.

“Bull Connor may be gone. But today we witness with our own eyes police officers kneeling on the necks of Black Americans. George Wallace may be gone. But we can witness our federal government sending agents to use tear gas and batons against peaceful demonstrators,” Obama said.

“We may no longer have to guess the number of jellybeans in a jar in order to cast a ballot,” said the former president. “But even as we sit here, there are those in power are doing their darnedest to discourage people from voting – by closing polling locations, and targeting minorities and students with restrictive ID laws, and attacking our voting rights with surgical precision, even undermining the postal service in the runup to an election that is going to be dependent on mailed-in ballots so people don’t get sick.”

Turn the page for Tucker’s takedown.