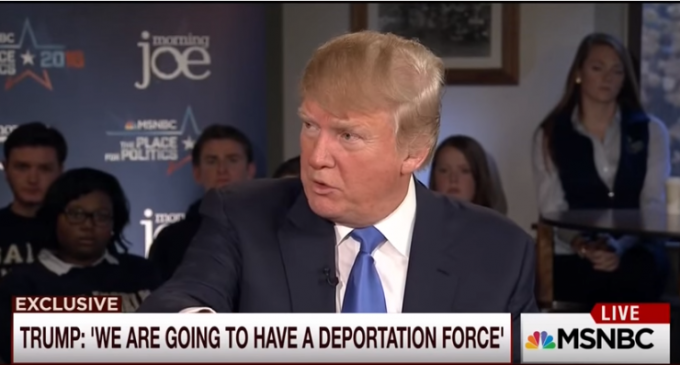 As if MSNBC didn't learn their lesson with their failed Republican debate a few weeks ago, Wednesday on “Morning Joe” the two hosts went after Donald Trump again for his stance on illegal immigration.

Trump replied with a calm demeanor and plenty of logic to spare. This verbal attack revolved specifically around Trump's plan to have a “deportation force” to wrangle up and remove the estimated twelve million illegal immigrants living in the United States. Despite the hosts of the liberal news network show going after him by forming their questions in a manner meant to make Trump look like a monster, he was ready with great responses to each of their questions.

While one host made the idea of a “deportation force” sound comparable to the days of runaway slaves by asking what would happen to those who hide or assist these illegals, Trump showed no sympathy. Instead his sympathy rested with the millions of people who are waiting to get into the country legally, and those who have already gone through the process and are legal U.S. citizens.