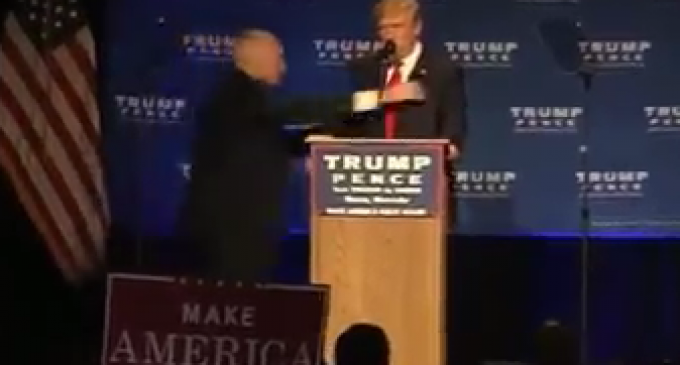 Donald Trump was rushed offstage on Saturday evening by Secret Service at a rally in Reno, Nevada.

While virtually all U.S. media reported that the commotion was of indeterminate cause, one UK new outlet stated that Secret Service believed that man was armed:

Secret Service agents rushed Donald trump offstage on Saturday evening during a rally in Reno, Nevada after they determined a protester in the audience with a gun posed a threat to the Republican presidential candidate.

‘Go! Go!' they shouted as they whisked him away and a combination of local police and private security wrestled the suspect to the ground.

Thousands of people scattered like a sea of bodies, screams rang out and authorities dragged the man away as he kicked and strained.

Some kind of a disturbance had occurred in the front of the room where Trump was speaking. He put his hand above his eyes to peer out into the crowd. As he did so, a security official rushed to Trump’s side and escorted him off stage. People near the front of the room suddenly scattered as U.S. Secret Service and uniformed officers jumped the barricades to apprehend an unidentified man.

Trump later concluded his rally without further incident. It was not immediately clear what the cause of the disturbance was.