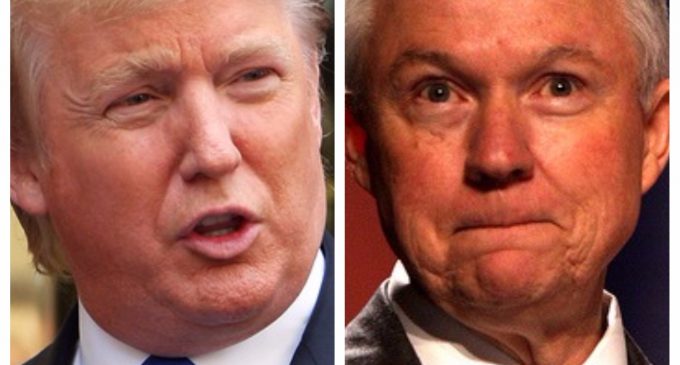 It appears that the first signs of a major crack in the Trump-Sessions ironclad relationship has appeared.  President Donald Trump nominated Jeff Sessions to the position of Attorney General in hopes that the Department of Justice, which was long absent of an AG who would actually prosecute violations of federal law, would somehow regain a bit of its previous machismo and begin working in tandem with the law, instead of subverting it.

The previous two Attorneys General were divisive, confrontational, and appeared to work exactly in diametric opposition to the will of the American people and to federal laws on the books.  Everyone is well aware that both Eric Holder and Loretta Lynch were two of the most controversial figures in American politics.  Merely taking Holder’s “Fast & Furious” debacle (initiated specifically by Obama, there is no doubt, because this is how he operates) and the infamous Lynch-Clinton tarmac meeting, they are enough to discount everything they have to say about any subject as partisan rubbish.  There’s an old saying about lying with dogs, and these two were “lying” in more than one sense of the word and phrase.

Sessions was supposed to change all that.  He was supposed to be the shining beacon of justice for a very weary American public who now believes that the entire United States Government entity, as a whole, is corrupt and wishes nothing but the continued pressure of the American people under the oppressive thumb of the Swamp.

It appears that the mounting pressure from all sides has finally knocked even the tunnel-vision oriented approach of Donald Trump off his game.  He has now dedicated himself to being at odds with his own Attorney General as well.  Read on the following page about the newest war between the president and the Republican Establishmentariat!