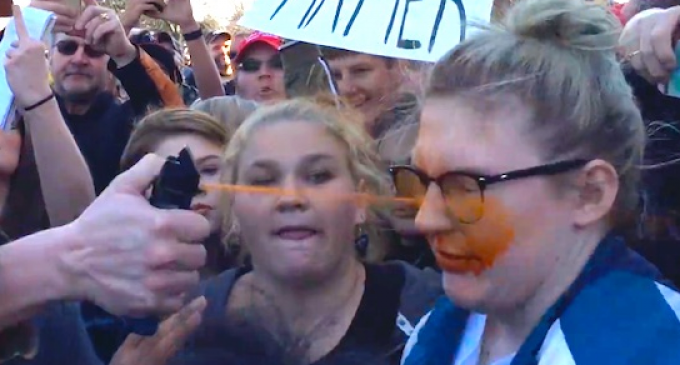 The intolerance of the left continues to manifest itself at Trump rallies, with things getting especially tense at a particular one in Janesville, Wisconsin.

Footage captured at the event of a 15-year-old anti-Trump protester punching a rally attendee before being maced has been making the rounds on the media.

Before she attacks the man she is seen arguing with, the protester claims that he sexually harassed her by “touching her chest.” Supposedly, this gives a new context to the exchange, with her only acting violently after an older man touched her against her will.

But other footage taken right before the assault shows no such thing. Not only that, but another video showing the girl after she got maced captures her admitting that she started it and “deserved” what she got it, dispelling any question of culpability.

It's troubling that discourse has descended to such a low level that liberals think they can accuse political opponents of sexual harassment and punch them without any repercussions. The silver lining, however, is that it proves who the real bigots and haters are:

“According to The New York Daily News Alex Drake is a 15 year old teen but news outlet WISC-TV and local police say the woman is actually 19 years old.”

“In the second video Alex Drake admits on camera that she deserved to be maced in the face for throwing the punch.”