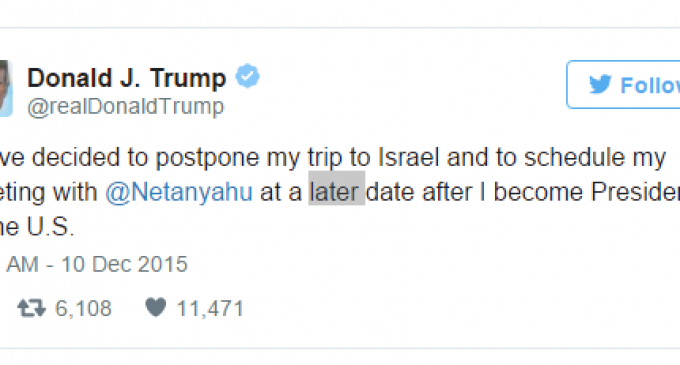 Amid the firestorm of controversy that sprung from Donald Trump’s call to ban all non-citizen Muslims from entering the United States, the bombastic GOP frontrunner has announced a trip to the Middle East in order to meet Israeli President Benjamin Netanyahu.

Such trips are common among presidential hopefuls, particularly ones who lack previous experience with international politics. Trump’s trip to Israel, then, should be somewhat expected, but his controversial comments are putting his trip under intense scrutiny. While it was announced that the previously arranged trip is moving forward, Netanyahu himself has already denounced Trump’s plan.

Considering the large percentage of Muslims in the country, Trump’s international trip could either serve to ease relations among him and the population he intends to temporarily restrict, or could further deepen tensions, depending on how he conducts himself in the region.

We already knows where the media stands on the issue, so Trump has an uphill battle to sell his plan in the coming weeks. To his credit, it seems his plan, which many consider common sense, hasn’t hurt him in the polls one bit.

To see the specifics of the trip, continue reading on the next page: