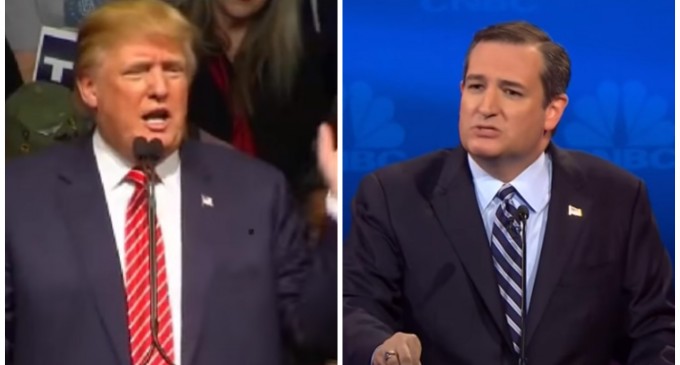 When an anti-Trump super pac — unaffiliated with Cruz, according to Ted — used a scandalous photo of Trump's wife in an ad blasting her worthiness to be First Lady, Donald responded — by firing back directly at “Lyin' Ted.” He did so with an ominous threat to “spill the beans” on Ted's wife, Heidi Cruz. He then seemed to relent — in a very Trump way — claiming there was no need to “spill the beans.” Instead, he simply paired the comment with an incredibly unflattering photo of Heidi next to a very glamorous-looking Melania. Until this moment, one of Ted's biggest assets has been his ability to stay above the fray of personal attacks from Trump. No more. He took directly to reporters, angrily demanding that Trump leave Heidi “the hell alone.”

Trump then accused Cruz of knowing exactly what was going on.

Trump's team doesn't seem to care, however, and is letting loose on Heidi Cruz in spite of Cruz's demands, and have taken to TV to “spill the beans” once and for all.

To see Trump aide Katrina Pierson do just that continue reading on the next page. It's likely not what you were expecting: