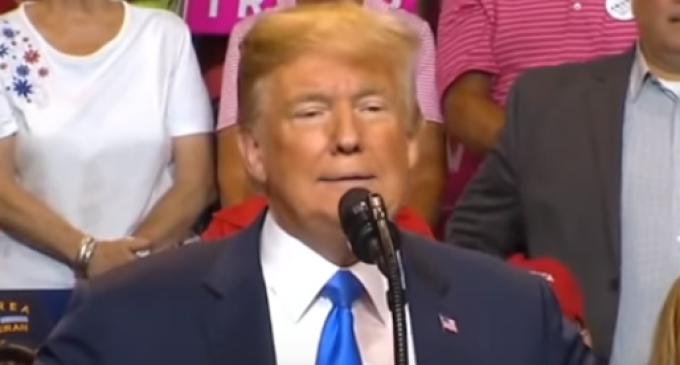 During a speech in Wilkes-Barre, PA on Thursday, President Trump responded to a rowdy crowd chanting the familiar “Lock her up!” mantra calling for the imprisonment of Hillary Clinton with an insinuation that he will finally put Hildabest where she so rightly belongs.

During the Presidential debates of 2016, Trump promised to appoint a special prosecutor to look into Hillary Clinton’s alleged violations tied to her private unsecured email server. In February of 2016 on The Hannity Show, Trump said:

“You have no choice… In fairness, you have to look into that. Now maybe she can prove her innocence. But it just seems to me that the public knows everything that they’re going to know. Emails have come out. She seems to be guilty. But you know what, I wouldn’t even say that. But certainly, it has to be looked at. If a Republican wins, if I’m winning, certainly you will look at that as being fair to anyone else. So unfair to the people that have been prosecuted over the years for doing much less than she did. So she’s being protected, but if I win, certainly it’s something we’re going to look at..

She’s running a very important race for herself.”

However, when Trump became President-elect he then pulled back on the promise, saying, “It’s just not something that I feel very strongly about,” he said. “I don't think they will be disappointed. I think I will explain it that we in many ways will save our country,” he said, adding that prosecuting Clinton “would be very, very divisive for the country.”

So which is it? So far, President Trump has made good on a great many promises. Has he just been buying time for some unforeseen reason? One comment made in a recent speech hints that “locking her up” may actually be in play.