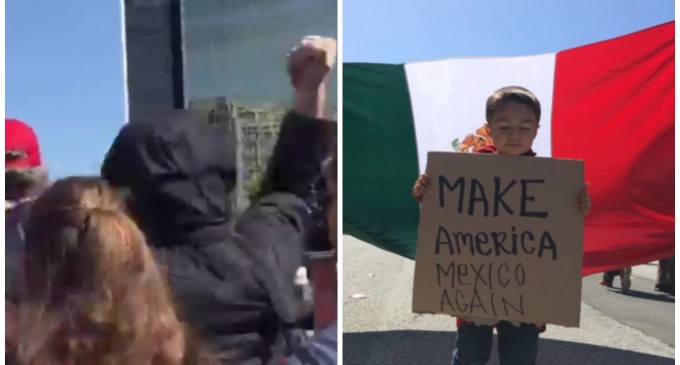 Chaos ensued in California, as thousand of protestors amassed, to violently decry Trumps arrival for the GOP Convention, in Burlingame.  On the heels of the turmoil in Orange County, CA, the night prior, where demonstrators vandalized a Costa Mesa police car, jumping on it and breaking out the windows while attempting to flip it over, Burlingame officers were ready for more of the same.

Just before one o'clock, Jim Brulte, Chairman of the California Republican Party,  assured the guests waiting for Donald Trump's arrival, that he was running late due to the considerable group of protesters trying to block his motorcade.

Alex Swoyer, of Breitbart, tweeted, “Apparently it's wild outside, police in riot gear. Peaceful inside, ppl dining & chatting.”  She reported that the luncheon was sold out, with roughly 600 people  waiting for Trump, who was an hour late.

Outside, however, was another situation altogether, with Trump having to sneak in by jumping a barrier and coming in through a back door.  He joked with the waiting guests, “I felt like I was crossing the border to get here.”  View the rage of the protesters on the next page.