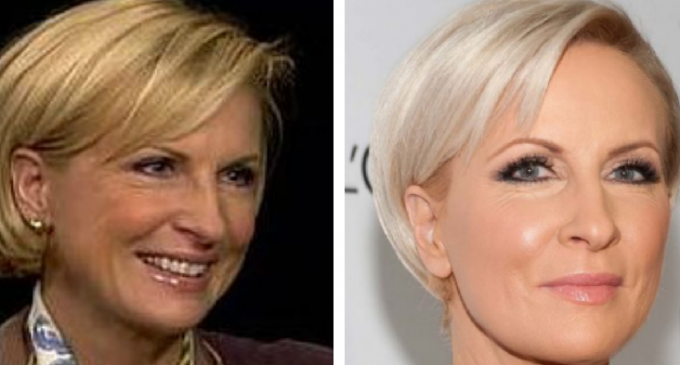 Mika Brzezinski, co-host to Joe Scarborough on MSNBC's low-rated “Morning Joe” is one mini-Leftist-riot away from being a full-blown Keith Olbermann. It's not bad enough that she has no credentials other than her father being somewhat known (much like Meghan McCain) but then she goes and gets engaged to a former-Establishment hack, Joe Scarborough, her television partner. Sometimes, it's like watching Lucy and Ricky Ricardo…only they're not funny, clever or talented.

While Joe spent a good amount of his time during the campaign last year cheering on the Trumpster, you could tell that Mika was beginning to pull the “I'm not having sex with you anymore if you continue to support that egomaniac,” routine, because like magic, he's now on board the Lefty Train of Insanity.

Mika, on the other hand, is an all-out-war type of Liberal, whose very DNA is infused with anti-First Amendment strands, racist chromosomes, and a penchant for saying things that appear rather…how shall I say…moronic. It's like Nancy Pelosi, Rosie O'Donnell, Kathy Griffin, Maxine Waters, Joy Behar, Lena Dunham, and Michael Moore all got together one day and said, let's create a little girl who's just like us. And voila! Miley Cyrus appeared. So, they tried again and Mika was born.

The woman cannot help herself in opening her mouth and believing that what she is saying is actually relevant or matters to most of America. From condoning violent rioting in Berkeley to believing that Trump's tax returns are seminally important to draining the Swamp that is D.C. We have to remember that this privileged little girl grew up really believing that she wanted to be a veterinarian because she didn't eat meat.

Now that she's famous beyond her wildest expectations (and if you don't believe her, ask all 168 of her fans) she has taken up the mantel of the MSNBC prophet-turned-basement-resistance-leader Keith Olbermann in order to further the cause and continue to question why Donald Trump is considered a “smart man.”

“It's beyond me!” Yes, we know, Mika. Like most subject matter that requires – whaddaya call that – oh, yeah! Thinking.

After a particularly very long and boring “Morning Joe” where Mika decided to once again show her intellectual prowess by editorializing on deep, probing issues like, “You know, it's like, if any businessman acted like Trump, people would just think, O-M-G, is this guy, like, crazy or what?”

So, as a matter of obligation, Trump (as he is apt to do) punched her back, right in her newly-constructed face…about ten times…rapidly. Read on further for details on this hilarious story.