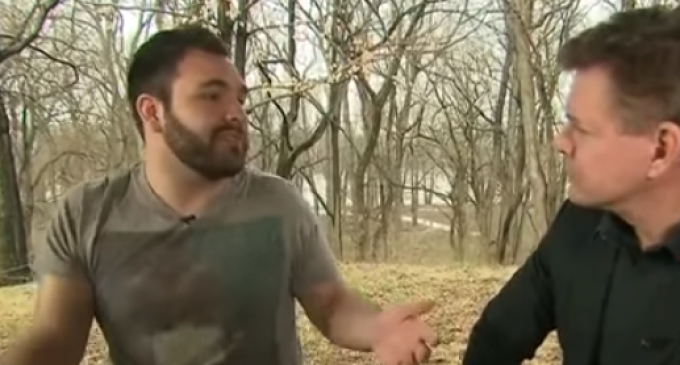 CNN gave Thomas Dimassimo, the Trump attacker, exactly what he was looking for, a podium to speak his mind to all who would listen.  Validating Dimassimo's behavior in an interview, CNN comes out on the side of the attacker, without balance or apology, willing to attack Trump via the interview on national television.

Dimassimo confessed that this was a premeditated plan, going back to November 2015, in fact his detailed knowledge of how many Secret Service men Trump has had and the type of security that travels with Trump demonstrates his clear thinking plan of attack.

Interestingly, just the month before Dismassimo's premeditation began, Trump did not have any Secret Service attached to him.  Obama had denied the protective detail.  Truth and Action shared Trump's position on this:

“I want to put them on notice because they should have a liability. Personally, I think if Obama were doing as well as me he would’ve had Secret Service [earlier]. I have by far the biggest crowds.”

Trump continued by stating that his campaign has had preliminary talks with the Secret Service recently and that so far, the government will not provide him with a definitive answer or his protection:

“They’re in no rush because I’m a Republican. They don’t give a sh*t. Of course I don’t think they’d want anything to happen. But I would think they should be very proactive and want protection for somebody like me that has 20,000 people at any time.”

Martin Savage stated, “Dismassimo stresses he was never ever intending to do any harm to the candidate.  He also says he has been thinking about this for a while.  This wasn't a spur of the moment action.  He actually started thinking about doing this last November but he thought that the Trump phenomena would fade away.  It never did , that's why he felt he had to make a protest and this was away of doing that….”

Premeditation was admitted when he answered, “If you had made it to that stage, were you going to attack him?”

“No! Not at all. There would have been no point.  Donald Trump is 6'3″, I'm 5'9′ maybe, you know.  He's a giant man, surrounded by thousands of followers, 12 Secret service and a former Ohio State offensive lineman. That would have accomplished nothing.”

Dismassimo has done his homework and one can almost hear the pat on the back by CNN.  Watch the video on the following page.