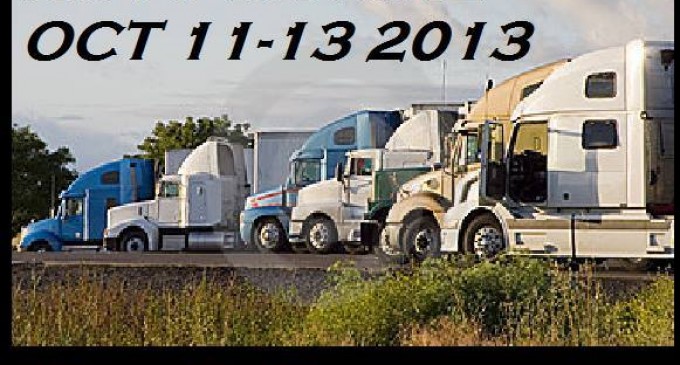 For their planned protest in Washington D.C. tomorrow, truckers have decided not to arrest members of congress as originally planned.

Instead, they will ask congressional members to resign or the truckers would ‘shut down the economy'.

Is this a better move?

Longtime Georgia trucker Earl Conlon was until Monday morning the coordinator of truckers traveling to D.C. on Oct. 11-13. He claims credit for calling the protest, a vision articulated in part by former country music singer Zeeda Andrews along with social media promotion.

Conlon originally told U.S. News he would seek to arrest congressmen Friday for allegedly committing treason as other truckers circle the inner loop of the I-495 beltway “three lanes deep.” He's changed his mind. Conlon still believes a “citizens grand jury,” meaning a body of jurors convened without court authorization, has the power to issue indictments, but he told U.S. News in an update “the truckers are not doing any arresting.”

Rather than seeking the arrest of lawmakers, Santilli (online radio host who is not a trucker) told U.S. News in an email, “we are asking [congressmen] to voluntarily resign if they refuse to accept our peaceful demands to follow the U.S. Constitution and the law. If they refuse to follow the law, we the people will bring the free-market economy to a halt… If it results in a major traffic jam as we saw in Egypt – so be it.”

Santilli says truckers and other participants will ask for the impeachment of President Barack Obama, but it's unlawful, he says, for truckers to “arrest” congressmen and he says it would be unsafe for truckers to turn I-495 into a parking lot.

Conlon snapped back at Santilli, who surprised him with an on-air radio call the trucker believed was a private conversation. Conlon said citizens do indeed have the authority to arrest public officials and that truckers can legally turn off their trucks on the road – if they're complying with regulations requiring a 34-hour “restart” after truckers “run out of hours” they're allowed to work.