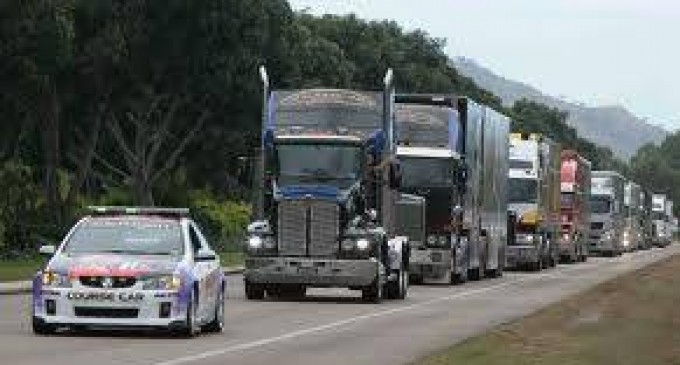 Truckers are pouring into Washington D.C. today and will be heading to the WWII Memorial to deliver a list of demands to congress, some of which is below:

Our Constitutional demands are simple: We want our legislators to follow the law.

Independent truckers are leading this convoy to deliver their Trucker demands in their left hand, but must importantly, the U.S. Constitution and non-negotiable demands in their right hand.

Here’s a few examples of what all Americans can get behind:

1) The U.S.A. shall not support al-Qaeda. Legislators such as John McCain and Lindsey Graham, et. al have already betrayed the American people in this regard, and must immediately resign.

2) The Debt-Ceiling shall not be raised. Period.

3) NSA Surveillance and archiving of the entire world’s communications must cease & desist.

4) The National Defense Authorization Act of 2012 must be nullified, and the public must be made aware of the implications of repealing the Smith Mundt Act. (allows Pentagon to spend billions on fake news stories for propaganda within the USA)

5) The I.R.S. must cease and desist their terror campaign upon political opponents on behalf of the Obama administration.

9) CIA Whistleblowers with knowledge that Osama Bin Laden was dead well before Obama claimed must be granted immunity for their whistle blowing testimony. (Osama Bin Laden was on the US payroll in 1999, and the CIA delivered a dialysis machine to his death bed. We have audio testimony from a confidential whistleblower who will testify to these facts.

10)All legislators and government officials who have sworn an oath to defend and support the U.S. Constitution must do so. Those who violate their oath shall be prosecuted immediately. All legislators who signed the NDAA 2012 must vacate their office immediately