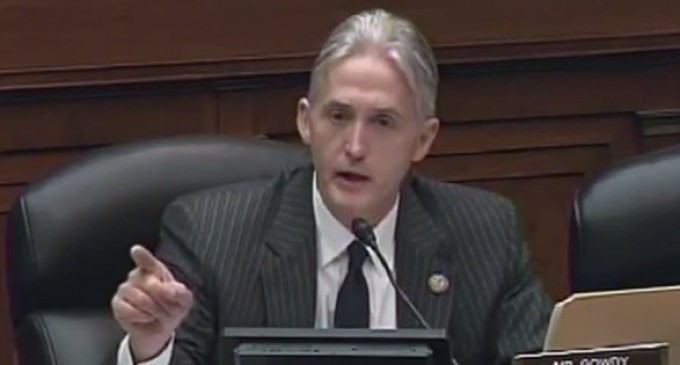 Here’s video of firebrand Trey Gowdy’s impassioned plea for Lois Lerner to be treated like any other witness. She should either offer testimony that will bear cross-examination or stand on her Fifth Amendment privilege against self-incrimination – but she should have to make a choice and not be able to benefit from both.

The House Oversight Committee’s decided Thursday morning to hold Lerner in contempt for refusing to testify before it.  Gowdy and others recognize Lerner’s Fifth Amendment right, but claim she waived that right by effectively testifying on her own behalf. Check out the video below and see if Gowdy’s argument persuades you.

A defendant in a criminal trial can refuse to testify entirely or he can testify on his own behalf and then face cross-examination from the prosecution, but he can’t offer the jury his own story and then decline to answer questions from the other side. That’s exactly what Lerner did last year in her opening statement to the committee, says Gowdy. She made multiple assertions of fact — she’s innocent, has committed no crime, etc — and then, when Issa and company tried to cross-examine her, she clammed up. That’s the basis of the contempt charge. You can’t selectively invoke your privilege against self-incrimination.

Or can you? Specifically, can you selectively invoke it in a civil proceeding like a congressional hearing even if you can’t do so in criminal court? Answer: It’s … hard to say. There isn’t much jurisprudence on the privilege in congressional settings. Ask six different lawyers and you might get six different opinions. Last year Alan Dershowitz said it was an open-and-shut case: Yes, Lerner had indeed constructively waived her privilege in an opening statement. Not so, said law prof James Duane: Witnesses have long been permitted to make “selective invocations” in civil proceedings (which are primarily about fact-finding rather than judgments of guilt), especially when they’ve been forced to appear against their will. Orin Kerr of the Volokh Conspiracy looked at the case law and found no clear answer; when he put the question to a law-prof listserv, most thought Lerner hadn’t waived her privilege although “opinions were somewhat mixed.”