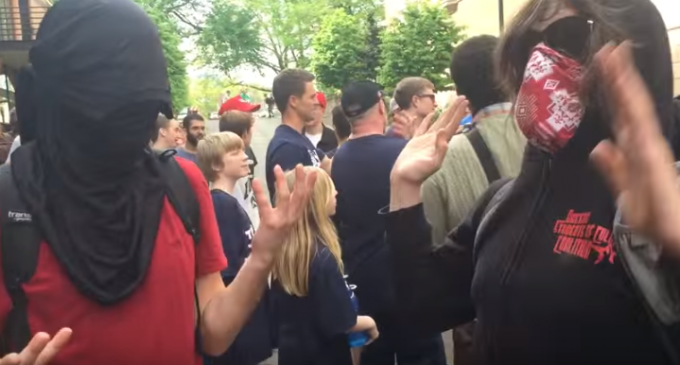 Anti-Trump protestors have stooped to an entirely new low at yet another campaign event for the GOP frontrunner and possible nominee.

Video shows Trump supporters debating with opponents of the Donald, who curiously felt the need to conceal their faces with bandanas and other garments. Considering what one of them did shortly afterwards, perhaps it was foresight on their part.

As one of the rally attendees explains that he once tussled with neo-Nazis at an anti-Iraq war protest, the anti-Trump activists listen disinterestedly before jumping at the opportunity to ask why he and his companion support a racist candidate. As proof of the Donald's bigotry, they point to the fact that David Duke endorsed him.

The attendees push back however, saying that Duke has endorsed tons of people and nobody in their right mind would say they all were racist. As they go on to dismantle their arguments, one of the activists, who self-identifies as a “tranny”, pulls down his bandana and spits on an attendee.See the video on the next page: