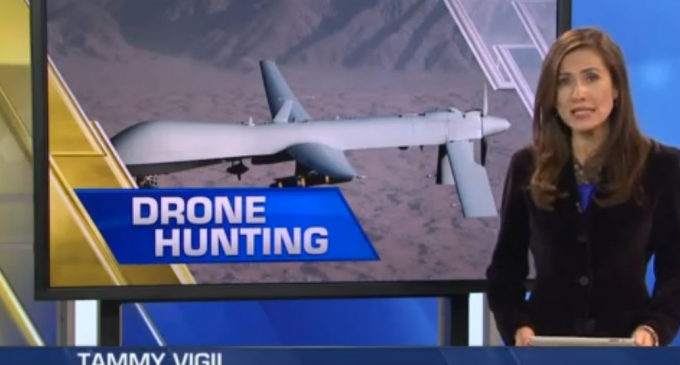 Got your drone hunting license yet?

No? Perhaps your town could follow the lead of Deer Trail, CO, where a drone hunting license is being created.

The town will vote this December on it's validity.

Citizens of Deer Trail would be able to purchase licenses and bring back shot-down drones for a bounty of up to $100. The text of the ordinance reads: ”As such, every unwanted unmanned aerial vehicle is hereby declared a threat to … precious freedom,” it says. And, yeah, the kids can get in on the drone shooting too. There shall be no age requirement or restriction for issuance of the hunting license.”

From the National Journal:

“He tells me he spent 14 years in the Army as a Psychological Warfare officer. I asked him what that meant and he summed it up as “propaganda.” And he says he’s using that experience in what he more euphemistically calls “marketing” to get the word out about drones. “I wouldn’t say that I’m a fear monger; I’m trying to illuminate an imminent threat that is on the horizon,” he says. “The perception in the absence of fact becomes reality.”

Basically, he’s creating a farce to make his central point: What does the mass proliferation of drones mean for privacy? For property rights? If a drone flies within 1,000 feet of a person’s airspace, is that a trespass? These are the questions the FAA will have to deal with as it makes recommendations for commercial drone use.”

It’s unlikely that Amazon will be flying drones over the wilderness in Deer Trail, but the irascible shotgunner brings to light very important questions in regards to privacy and safety regarding the use of drones.

The Freedom Report Podcast produced a show yesterday that details some of the privacy and safety concerns here:

Michael Huerta, the head of the Federal Aviation Administration put together a plan for the next five years about how the agency will integrate commercial drones into American airspace. Six test site locations will be in place by the end of this year. The National Journal reported that the FAA was only looking at drones that flew under 400 feet. The Amazon drones would travel well over ten miles from a distribution center and would likely go much higher than 400 feet. Imagine air traffic controllers being forced to adapt to thousands of little drones in flight paths.

Maybe if we privatized our air traffic system like the Franco model so it can work with “private sector velocity,” they could handle the workload?

The National Review‘s interview with Steel concludes with the question hanging in the air about whether George Orwell’s 1984 style world is going to happen. ”Not in the same sense as George Orwell did,” Steel said. “But I think its going to be a lot trickier than that, a lot more subtle. Technology advances far quicker than the law does; as a society we are too eager to embrace the next new toy,” Steel says.