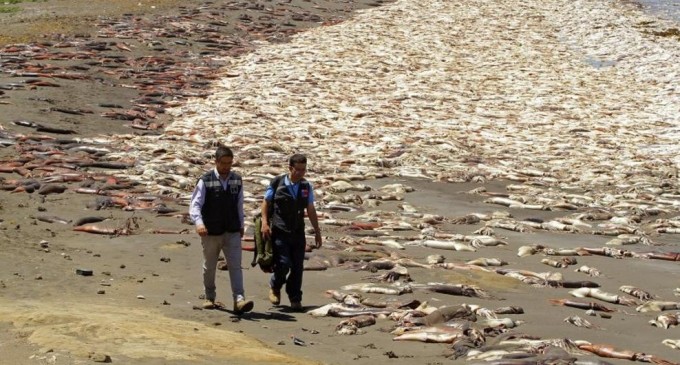 Is it Fukushima or El Niño causing 10,000 dead squid to wash up on the Chilean shores of  Santa Maria Island over the past week?  Mass die-out of cephalopods, birds on the West Coast and over 25 in Alaska and British Columbia certainly should raise concern and response from scientists world wide to determine the cause of the abnormal mass death of a variety of creatures.

This most recent incident in Chile, with thousands of decomposing squid bodies washed up on the shore of the small island, has prompted health concerns.  The stench of death is overpowering.  Chilean National Services for Fisheries and Aquaculture (Sernapesca) has gathered samples of the dead squid and the water to determine the cause.  At this time, the die-off is truly a mystery.

This phenomenon, according to some experts, could be do to higher than usual seawater temperature, but pollution, such as radiation from Fukushima, has not been ruled out.

Video footage of the massive squid die-off can be found on the next page.