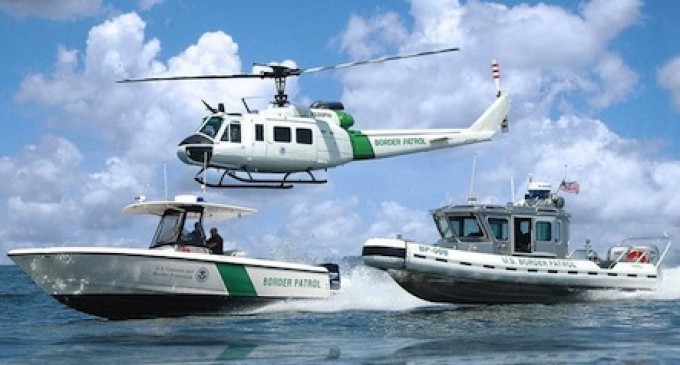 Texas Lt. Gov. David Dewhurst states “The federal government is not providing the resources. I’ve grown convinced over the last year that this administration has no intention of securing the border.”

Dewhurst announced last December that Texas would be closing its border itself without federal support and now wants a 3 month ‘surge operation' where they will beef up the border with boots, boats and aircraft.

The last border initiative, launched by the Dept. of Public Safety, named “Operation Strong Safety,” occurred last Oct. in the Rio Grande Valley over a three-week period and resulted in a significant drop in criminal activity along the border.

Dewhurst points to this as proof that Texas can close the border themselves and is calling to beef up border security with a short term, 3-month surge to prove that a long term, permanent surge is a good idea.

The hang up now seems to be House Speaker Joe Straus, who is needed to sign off on the plan but has yet to commit.

Dewhurst, with the support of Gov. Rick Perry, is pushing for a three-month “surge operation” that calls for ramping up the number of boots, aircraft and boats on the border to crack down on smuggling and drug cartel crimes.

A May 2 letter signed by Dewhurst and Perry directs Department of Public Safety Director Steve McCraw to start gearing up for a new operation starting Sept. 1 targeting border counties.

Aside from Perry, Dew­hurst also needs Straus, R-San Antonio, to sign off on the directive, which calls for the DPS to use funds allocated for fiscal 2015 to accomplish the mission and then wait to see if the Legislature replenishes the money next session.

Straus, however, has yet to commit.

“We've reached out to the speaker to see if there are any wrinkles we need to help iron out,” Dewhurst said in an interview.

Straus spokesman Jason Embry said talks between the speaker and Dewhurst about enhancing border security are ongoing “but they have not reached an agreement.” Embry also noted that state police can put more boots on the ground along the border without approval from the state's top three lawmakers.

“DPS also has the authority to send more troopers and equipment to the border immediately if the director deems necessary, as he has in the past,” Embry said, emphasizing that the current state budget invests $343 million in border security over two years, “illustrating that this issue is a priority for the Texas House.”

Dewhurst already has gone on television and pledged to Texans that a new short-term surge is “imminent.” During a televised debate in Dallas against state Sen. Dan Patrick earlier this month, Dew­hurst said he had locked down agreements with Perry and Straus.

However, Dewhurst also acknowledged that he overplayed his hand during the debate.

“I was told that I had an agreement with the speaker's office by the speaker's personnel,” Dewhurst said. “Otherwise, I wouldn't have said it.”

He added: “I would expect you would see something happening along the border shortly.”

Border security has been a hot topic in the lieutenant governor's race, and Patrick, R-Houston, has charged that Dewhurst's border surge plan is politically motivated since the idea was rolled out in the middle of the campaign.

Mark Jones, a political scientist at Rice University, said Straus will not use his position of power to cater to a “campaign stunt.”

“Unlike the lieutenant governor in this case, Straus does not want to get drawn into what is, effectively, a campaign stunt to spend money on a short-term deal that when it's over will have yielded very little,” Jones said.

In December, Dewhurst proposed a continuing border operation, asking Perry and Straus to give their approval to fund a $60 million annual “permanent surge” on the border.

Since that idea has yet to come to fruition, Dewhurst is selling the short-term border mission as a way to prove to lawmakers that his “permanent surge” is a good idea.

The last border initiative launched by DPS played out in the Rio Grande Valley in October over a three-week period.

That initiative, dubbed “Operation Strong Safety,” included a beefed-up presence of boots on the ground and patrols in the air and water, helping to decrease crime in the area, according state police data released during a Capitol press conference in December.

At the time, officials said the operation resulted in significant decreases in criminal activity, and Dew­hurst has lauded the results as proof the state can “shut down the border.”

That operation became marred in controversy, however, after DPS set up traffic checkpoints, prompting intense backlash from residents, lawmakers and civil rights groups who suggested the roadside stops were racially motivated. The DPS responded by saying it would refrain from setting up checkpoints in the future without the Legislature's approval.

The lieutenant governor declined to release more details, but the letter signed by him and Perry directs the DPS' McCraw to draw up an operational plan with a detailed cost estimate within 15 days of the start of the surge.

It also would require the DPS to report to the Legislature and governor on costs and effectiveness by March 15, 2015, which would be used to help lawmakers determine whether to replenish the funding.

“In the face of evolving threats of drug and human trafficking and other transnational and cartel-related violence and crime,” the letter reads, “the State of Texas stands ready to build on Operation Strong Safety and take additional steps to further protect its citizens.”

Growing impatient with the federal government’s reluctance to do anything to stem the tide of illegal immigration, human trafficking and drug smuggling, Texas officials took matters into their own hands, bringing all of it to a screeching halt along the Rio Grande section of the U.S./Mexican border.

“In the Rio Grande Valley sector, nearly nothing moved in those three weeks,” Texas Lt. Gov. David Dewhurst said in an exclusive interview with Breitbart News. “We shut it down. We had teams of Texas law enforcement in the brush, high-altitude aircraft, gun boats and more. Our intel revealed that the Gulf cartel was growing frustrated with our three-week effort.”

Dewhurst told Breitbart that it all comes down to resolve and a willingness to spend the money necessary to get the job done.

“The border issue is just about dollars and cents,” the lieutenant governor said. “This proves Texas can do the job the federal government has refused to do — to invest in the border and shut it down from illegal activities that are hurting Texans and other Americans. Texas will protect our own citizens and other Americans from the criminal gangs that are destabilizing our state and our nation.”

The plan, according to Dewhurst, was to do a three-week operation with the Texas Department of Public Safety (DPS) as the tip of the spear. He said the effort cost approximately $5 million each month. “We are fixing to appropriate more money,” he said. The Lt. Governor is seeking an additional $60 million to be approved by the State Legislative Budget Board.

Dewhurst stated, “We started appropriating money to plug the holes that exist in the border. We’ve allocated hundreds of millions, as a state, since 2008.” He added: “Nearly 796 million of state money, not a dime federal, has been allocated by the State of Texas to plug the holes in our border. This covers things like over-time for Sheriffs’ deputies,  equipment, and Texas Rangers SWAT teams [referring to the elite Texas Rangers, an arm of the DPS].”

Although the state has for years reached out to the federal government to step up its border security efforts, little has come of it.

“For six or seven years, I’ve been calling on our congressional delegation in D.C. We need to at least double, if not triple, the size of our Border Patrol,” Dewhurst said. “The federal government is not providing the resources. I’ve grown convinced over the last year that this administration has no intention of securing the border.”

This is just unacceptable. We have a problem and everyone knows it except for the Obama administration and people in high levels of Border Patrol. Organized crime groups in Texas are contracting with Mexican cartels to be their enforcers. The cartels’ presence are in all of our major cities. Seven of the eight Mexican cartels operating in Texas are using our state as a staging area for their operations across the U.S.

Illegal immigration is one issue, and we all understand why people want to come here. I’m a strong believer in legal immigration, but not illegal immigration. We have young girls being trafficked as slaves for immoral purposes across our border and through our state. This cannot be allowed.”

During that three-week period, Texas proved that the border can be secured.

“The bottom line is that we have just showed that we can shut down the border for X-number of dollars,” Dewhurst said. “We need to find the $5 million per month to make these operations continuous and replicate what we have just accomplished.”