Craig Baker, 46 year-old stone-shop owner whose family has owned the farm for the past two centuries, claims that the association knew about the pigs when they bought the property. Certainly, it would not be fair for them to ask him to get rid of the animals in acquiescence to an incoming Mosque.

“I am just defending my rights and my property,” Baker said. “They totally disrespected me and my family.”

Initially Baker and Kamel Fotouh, the president of the 500-member Islamic Association, were on good terms. But things turned sour at a town meeting, where Baker says Fotouh insulted him by asking him to move.

“That was the last straw for me … calling me a liar, especially in front of three or four hundred people at that meeting,” Baker said. “Mr. Fotouh said it would be a good idea if I considered packing up my stuff and moving out further to the country.”

Fotouh says his group has to construct the mosque because the others in the Houston area don’t provide the kind of environment they are looking for.

“We feel that these mosques are not fulfilling the needs of the community as they should. So, our vision is to have an integrated facility,” said Fotouh.

He said the pig races no longer bother him or his members, and they’re going ahead with their plans to construct the mosque.

Muslims do not hate pigs, he added, they just don’t eat them.

Neighbors have been showing support for Baker’s races, even coming in the pouring rain and giving donations ranging from $100 to $1000 to sponsor the events.

Last Friday, more than 100 attended the pig races, and many say they don’t want the mosque either. Some fear it will appear out of place and hurt their property values. 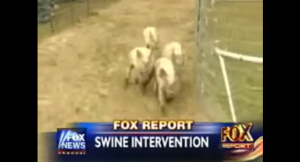