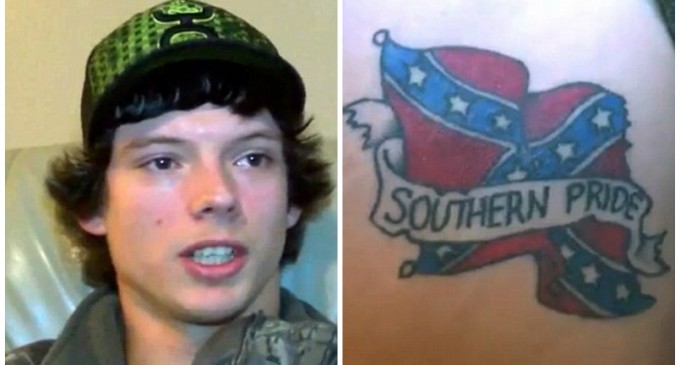 Unfortunately, it seems the left-wing hysteria over the Confederate flag has managed to infiltrate the ranks of our armed forces.

This is apparently the case as 18 year-old Anthony Bauswell learned when he tried to enlist in the Marine Corps. A native of Arkansas, Bauswell wanted nothing more than to serve his country and protect it from those who would do harm to it. This wasn't enough for the recruiters though, who objected to a certain tattoo the teen had.

Like many Southerners, Bauswell felt proud of his heritage and sought a way to commemorate it. He decided the best way to do that was to get a tattoo of the Confederate flag. Although many Americans recognize it as a harmless symbol of Southern tradition and history, others view it as a racist symbol, so Bauswell added the words “Southern pride” underneath the flag to differentiate it from racist interpretations.

The words, however, didn't convince the recruiters looking over him, with one of them saying “DQ, just automatically, DQ,” immediately upon seeing the tattoo according to Bauswell.