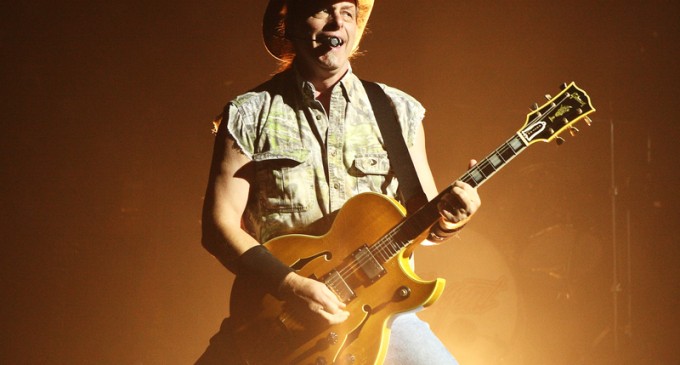 In an time when most celebrities race to pay obeisance to Obama, classic rocker Ted Nugent stands his ground and announces that not only does the emperor have no clothes, he is guilty of treason.

After watching 13 Hours, the new film about the 2012 terrorist attacks on the American embassy in Benghazi, Nugent was furious over the administration's incoherent and irresponsible handling of them. With radical Muslim terrorists managing to take the lives of four Americans, it is no wonder that the Cat Scratch Fever singer was so irate.

Slamming both Obama and his then Secretary of State Hillary Clinton, Nugent referred to them as “chimpa** punk[s]” and said they should “be tried for treason & hung” over their non-response to Benghazi. While Nugent's language might have been a little harsh, many would argue that given the subject matter, he can't be blamed for reacting so angrily.

Of course, the people arguing this aren't liberals. No, to them, Nugent is the one guilty of treason, for what they describe as “threatening a president.” Never mind that said president is guilty of refusing to protect Americans abroad and thus not worthy of the office he inhabits.