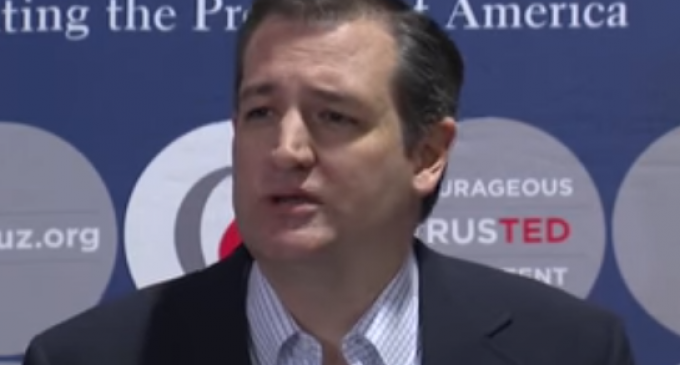 Things are getting not simply heated, but dirty as well in the contentious Republican primary between Ted Cruz and Donald Trump.

While the two once studiously refrained from speaking of ill each other, the senator from Texas and the real estate tycoon-turned-populist candidate have started going after each other now that the competition has narrowed. It is against this background that some major bombshell allegations were made against Cruz.

According to a rather eyebrow-raising story for the National Enquirer, the senator has cheated on his wife with at least five women whom he saw regularly. The report contains photos of the alleged mistresses, with black bars concealing their eyes.

Even more shocking, the women in question are said to be prominent political and legal figures in their own right. This part of the story might make some question it's authenticity, as political figures tend to have affairs with women not involved or insignificant in politics themselves.

Watch Cruz deny the allegations on the next page:

Cruz denied the Enquirer‘s claims in no uncertain terms, and pointed the finger at Roger Stone, a high-ranking Trump campaign staffer and veteran political strategist. He also noted that the magazine has close ties to Trump, something that might make even more people question the story's veracity. Ultimately, it will be up to readers to determine if they think the allegations against Cruz are true or not:

This person also said that Trump’s campaign was a source for the [Carson] article: ‘His campaign provided information that was used,' he explained. A Trump friend said that in the days leading up to the article’s publication Trump was telling people that Carson ‘had a lot of medical malpractice suits' and ‘almost killed a guy.'

The National Enquirer also denied the front-runner's campaign had been the source. Allies of Marco Rubio were pushing the story before he dropped out — but it's not clear whether those efforts led to the Enquirer piece.”