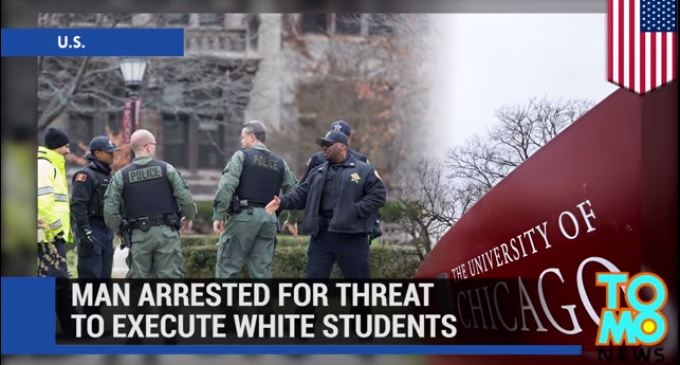 A 21-year-old male was arrested on Monday for threatening to kill students and staff at the University of Chicago. If you were to read this on a liberal news outlet, that’s probably all the information you would get.

What the media is trying to hide is the fact that this attack was specifically aimed at white people. He issued a threat on social media during Thanksgiving weekend, claiming that he would be arriving at the University of Chicago’s campus quad on Monday at 10 A.M. armed with an M-4 Carbine and two fully loaded Desert Eagles to execute “approximately” sixteen white students and staff.

The threat came as a response to the death of Laquan McDonald, who was killed after Chicago police officer, Jason Van Dyke fired sixteen rounds into the fleeing teenager. So why are all white people being blamed for this by the same people who claim to be against intolerance? Well, like all other matters involving African American activists, it isn’t so much about equality as it is about hatred towards white people.