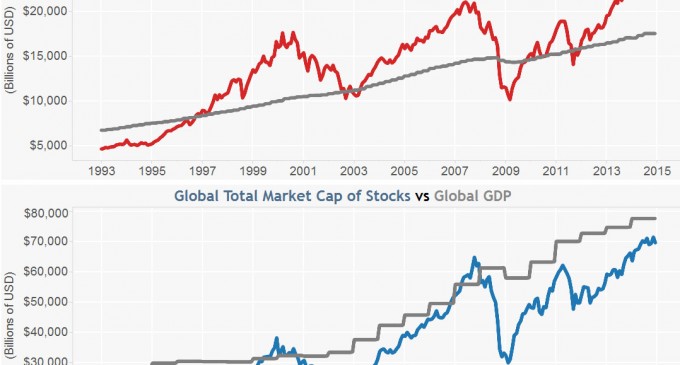 Looks like we’re right back where we started before the 2008 financial crisis, only now we are in much worse shape with all the debt that’s been added onto the back of the nation.

At the end of November, the total market cap of US stocks exceeded US GDP by a new record of nearly $9 trillion. This alone indicates that the US stock market is currently experiencing its largest bubble in history. What makes this current US stock bubble unprecedented and especially disturbing is how far the overall global stock market has been left behind – with the total global market cap of stocks trailing global GDP by $8 trillion.

The report analyzed 475 U.S. counties with a combined population of more than 221 million — accounting for more than 70 percent the total U.S. population — based on three early warning signs of a possible home price bubble: if the market was less affordable in October 2014 than its peak price during the 2005 to 2008 housing bubble; if a market was less affordable in October 2014 than its historical affordability average since January 2000; and if a market had a rising foreclosure rate on loans originated in 2014 compared to loans originated in 2013. See full methodology below.

“Affordability and foreclosure rates by loan vintage are two key metrics that will help consumers, investors, institutions and policy makers identify if a housing market is at risk for another price bubble,” said Daren Blomquist, vice president at RealtyTrac. “While 99 percent of markets have not returned to the irrational affordability levels during the previous housing bubble, one in five markets have now exceeded their historical affordability norms, which is a strong sign that either a new home price bubble is forming in those markets or that home price appreciation will soon plateau until incomes can catch up.

30 counties both unaffordable by historical standards and with rising foreclosure rates There were 30 counties (6 percent of all counties analyzed) with a combined population of nearly 19 million where the October affordability percentage was above the historical average and where foreclosure rates on 2014 vintage loans were higher than foreclosure rates on 2013 vintage loans, including Kings County, N.Y. (Brooklyn), San Francisco, San Mateo and Alameda counties in the San Francisco metro area, Suffolk County in the Boston metro area, Orange County in Southern California, Honolulu County, Hawaii, Denver County, Colo., Washington County, Utah in the St. George metro area, and Deschutes County, Ore., in the Bend metro area.

Six counties less affordable than during 2005 to 2008 housing bubble But thanks to lower interest rates and higher incomes in some of the 58 counties, there were only six counties nationwide where a median-priced home in October 2014 was less affordable for median income earners than at the peak of the 2005 to 2008 housing bubble: Suffolk County, Mass., in the Boston metro area, Travis County, Texas, in the Austin metro, Jefferson County, Ala., in the Birmingham metro area, Brazos County, Texas in the College Station metro, Allegan County, Mich., and Montgomery County, Tenn., in the Clarksville metro area.

“With the stiff competition for homes in Seattle, one might think that our market is well on its way to a bubble, but buyers have gotten more savvy and aren’t overbidding at levels we saw a year or two ago,” said OB Jacobi, president of Windermere Real Estate, covering the Seattle market. All three counties in the Seattle metro were more affordable than their historical levels in October despite a slight increase in foreclosure rate in two of the three counties. “We also have a strong job market with wages that are keeping up with appreciation — especially in the growing tech sector. As a result, prices in Seattle are appreciating at a healthy pace, but they’ve slowed from the double digit increases we saw last year.”