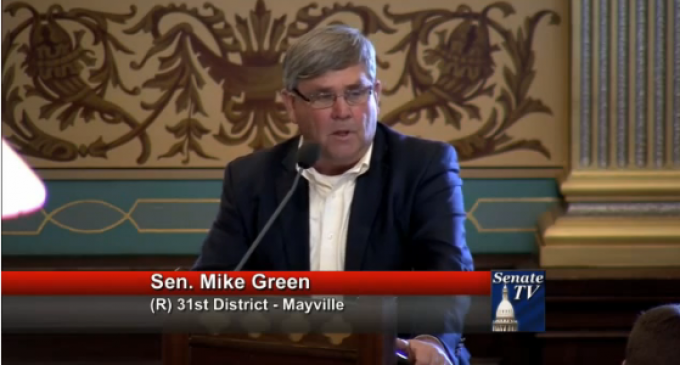 Our Founding Fathers put a clause in the Constitution, called a Constitutional Convention, that allows states to change or even scrap the entire Constitution if the needed to fight federal tyranny.

Michigan just joined the list of states calling for a Constitutional Convention, bring the total number of states to 34.

This means that 68% of the states are in agreement – so we now have the required 2/3 majority to make this happen!

Whatever our states do in the convention is law – Congress and the rest of the federal government can do nothing about it.

Of course, tyrants don't give up so easily, so it will be interesting to see what goes down when the states hold their convention.

Will we overturn all the unconstitutional measures the federal government has imposed and reclaim our country, or will a civil war be made imminent?

Michigan just made state 34 out of 50 to call the Constitutional Convention into play. That means that 68% of the states are in agreement. That means they have two thirds of the states ready for action. This may well trigger the other states into signing. Three more and even the US Congress could not stop it.

This is massively huge news, but yet the media remains silent on news that they may override the Congress of the United States and force them to accept something they continue to vote down.

The most important political development in 200 years was triggered last week, when the state legislature of Michigan became the 34 th state to demand a “Constitutional Convention” in the United States. Under Article 5 of the US Constitution, if 2/3rds of the states call for such a convention, (meaning 34 states) it MUST take place. During such a convention, the ENTIRE Constitution can be changed; nothing is off-limits. This would even allow the States to dismantle the federal government without its consent, and repudiate the debt which that government has incurred! When it voted for the convention last week, Michigan became the 34 th state, thus meeting the requirement.

A goal has been reached behind what would be an unprecedented effort to amend the U.S. Constitution, through a little-known provision that gives states rather than Congress the power to initiate changes. This is the most significant political development in the entire world in the last 200 years. ~Political Ears

A political blog on the Fox news page seems to be the only mainstream source.

Michigan matters, because by some counts it was the 34th state to do so. That makes two-thirds.

In the wake of the vote, California Republican Rep. Duncan Hunter pressed House Speaker John Boehner on Tuesday to determine whether the states just crossed the threshold for this kind of convention. Like Michigan lawmakers, Hunter’s interest in the matter stems from a desire to push a balanced-budget amendment — something that could potentially be done at a constitutional convention.

“Based on several reports and opinions, Michigan might be the 34th state to issue such a call and therefore presents the constitutionally-required number of states to begin the process of achieving a balanced budget amendment,” Hunter wrote.

“With the recent decision by Michigan lawmakers, it is important that the House – and those of us who support a balanced budget amendment — determine whether the necessary number of states have acted and the appropriate role of Congress should this be the case.”

If two-thirds of the states indeed have applied, the ball is presumably in Congress’ court to call the convention.

But Article V is rather vague, and it’s ultimately unclear whether 34 states have technically applied. In the past, states like Oregon, Utah and Arizona have quietly voted to approve the provision in their legislature.

Alabama rescinded its request in 1988 but in 2011, lawmakers again applied for a convention related to an amendment requiring that the federal budget be balanced. It was a similar story in Florida in 2010.

Louisiana rescinded in 1990 but lawmakers have tried several times, unsuccessfully, to reinstate the application since then.

It’s unclear whether the applications still count in these scenarios.

Some constitutional scholars like Gregory Watson, an analyst in Texas, say once states ask, there may be no take-backs.

“There is a disagreement among scholars as to whether a state that has approved an application may later rescind that application,” Watson told The Washington Times. “If it is ultimately adjudicated that a state may not rescind a prior application, then Ohio’s 2013 application for a Balanced Budget Amendment convention would be the 33rd and Michigan’s 2014 application would be the 34th on that topic.” ~Fox

This is huge. It could force the Congress of the United States to live by a balanced budget amendment. If the amendment passes Congress, the President would have to balance the budget of the United States and start paying off the debt. No more borrowing from other countries or Social Security, live within your means. But yet no one is talking about this.