Welcome to the Twilight Zone, people, where even the most bizarre political stories are almost normal! You have entered a place where candidates in America can espouse Socialism and Communism confidently and with glowing appeal, where the most innocent in our society are murdered to cheering and standing ovations, and where the very halls of Congress are rife with corruption, secret meetings, Deep State underpinnings, and breathtaking intellectual dishonesty!

Stacey Abrams was sitting on top of the world back in 2018 when she chose to run for the governorship of the State of Georgia. She knew all too well that in order to win, you must have three things: one, you need celebrity endorsements; two, you needed veterans in the political spectrum; and three, you needed a soaring confidence that bordered on condescension and that rivaled even the great and powerful Barack Hussein Obama.

She had wrangled the very biggest of celebrities, like Oprah Winfrey, even bigger political superstars, like Hillary Clinton, and garnered one of the most superior looks of disdain and haughtiness to be sported this side of the Atlantic.

Abrams was the ultimate in Democrat identity politics circles. She was a woman, minority, Progressive, and most importantly, a person who believed every bit of propaganda spewed by the Left about what it meant to be a minority Progressive woman who fit hand-in-glove into every Liberal category imaginable. She said all the right things and knew all the right people. What could possibly go wrong?

It soon became apparent that what could go wrong was a man named Brian Kemp. This man had the audacity to assume that he could beat Abrams in the race for governor. He campaigned on a conservative platform, but for Abrams, he was an absolute horror show. On different occasions throughout the campaign period, she made sure to foreshadow a possible defeat with warnings to her Progressive base about the terrifying reality of a Georgia state under his control. She called him a “cartoon villain” and that he was the “architect of voter suppression.” In other words, she was hoping that all these lies would be believed in the rare occasion that she lost the election.

In the end, Abrams lost the election by a wide margin, but instead of accepting her fate gracefully, the former gubernatorial candidate decided to take the Hillary Clinton route of defeat by shifting the blame from herself and her poor performance to her opponent and the evil forces that stood behind him. She also donned the mantel of Clinton by calling her opponent “illegitimate” and claimed that people who looked like her were not permitted to vote in many districts. 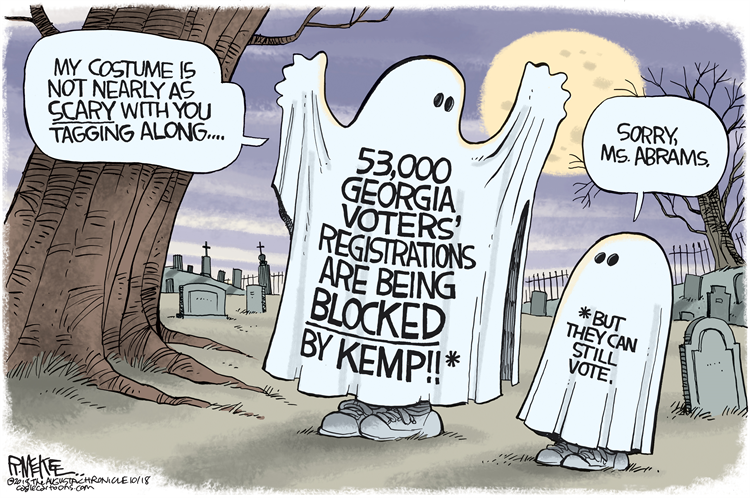 After embarking on the blame circuit, she arrived in March of this year on the set of that bastion of intellectual vacuity known as The View and continued her unload of insults and baseless charges leveled in Kemp’s direction. This was all, of course, cheered on by both the members of the audience and the hosts of the show. When asked about whether or not she would consider running as Joe Biden’s vice presidential running mate, her face screwed up and a disdainful smirk crossed her lips.

Then, on CBS This Morning, she added, “I think the success I had in our election… positions me to be just as capable of becoming the President of the United States as anyone running. My responsibility though, is to make sure I’m running for the right reasons and at the right time.”

So, basically, she blew off poor Sleepy Joe, assuring the ladies of The View that there was no way she would consider running for that old geezer.

How the months have dragged on. There’s nothing more sobering for a losing candidacy than an adoring press who are beginning to doubt your authenticity or winning prowess. There’s also a sort of lonely feeling that begins to gnaw at you once you come to grips with the fact that, your political career may have begun and ended with that failed gubernatorial bid.

She lost her race last fall for governor, yet still feels she’s qualified and entitled to hold a major political post — now she’s turned up in Iowa.
Stacey Abrams of Georgia was in Iowa on Monday — and she told her Democratic base she is willing to serve as a vice president for whichever nominee is chosen in the Democratic primary.

Thank you for my afternoon chuckle!

This individual lost her election in her home state in the 2018 midterms — and still feels she is qualified to hold a political post.
Abrams is just professionally angry, in my view.

Even if she had won her race last fall, she would still be mad and accusing people of various outrages.

So, she rejects any notion in March that she’ll run under the banner of another lesser human being, but then decides that the spotlight is a lot glossier in sunny Iowa. Hmmm.

Well, there we have it. Stacey Abrams, mimicking Arnold Schwarzenegger in the Terminator movies. The more she insults her rivals and continues to show up for a political hand-out, the less money she’ll haul in at the polling box office. The “I’ll be back!” attitude is wearing thin in Liberal-land for this would-be running mate. Perhaps it’s time Abrams made like the M1 tank of the same name and either gets an upgrade or retires her service.