According to NBC’s KSDK5, the gun Patricia McCloskey waved at protesters in the video that brought her and her husband into the international spotlight was inoperable when it arrived at the St. Louis police crime lab, but a member of the prosecutor’s staff ordered crime lab experts to modify the guns so that it was “readily capable of lethal use.”

In Missouri, police and prosecutors must prove that a weapon is “readily” capable of lethal use when it is used in the type of crime with which the McCloskeys have been charged.

Assistant Circuit Attorney Chris Hinckley ordered crime lab staff members to field strip the handgun and found it had been assembled incorrectly. Specifically, the firing pin spring was put in front of the firing pin, which was backward, and made the gun incapable of firing, according to documents obtained by 5 On Your Side.

Firearms experts then put the gun back together in the correct order and test-fired it, finding that it worked, according to the documents.

Crime lab workers photographed the disassembly and reassembly of the gun, according to the documents.

Patricia McCloskey and her husband, Mark McCloskey, have said the handgun Patricia McCloskey waved at protesters was inoperable because they had used it as a prop during a lawsuit they once filed against a gun manufacturer. In order to bring it into a courtroom, they made it inoperable.

Their attorney, Joel Schwartz, confirmed to 5 On Your Side that the McCloskeys intentionally misplaced the firing pin on the gun and that it was in that condition when Patricia McCloskey waved it at protesters and turned it into their former attorney Al Watkins.

“It’s disheartening to learn that a law enforcement agency altered evidence in order to prosecute an innocent member of the community,” Schwartz said.

A spokeswoman for Gardner wrote: “We can’t comment on a pending case.” 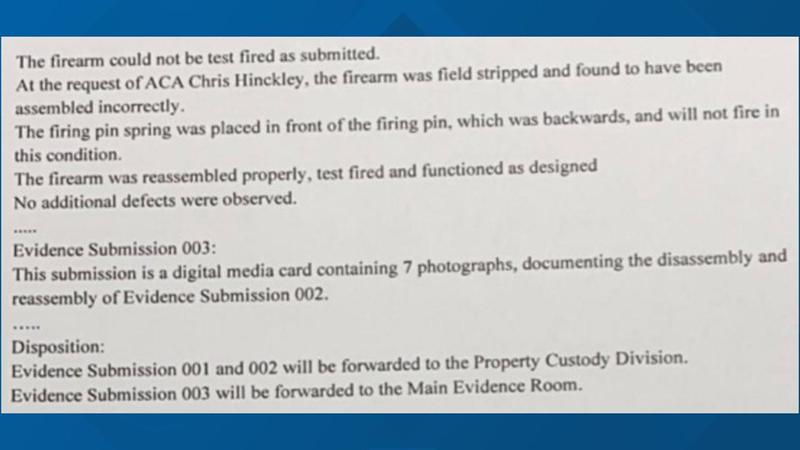