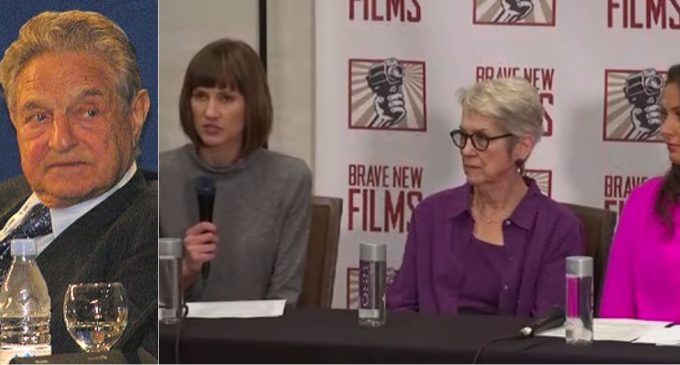 If George Soros were suffering from gender dysphoria, I'd bet serious bank that Hillary Clinton was his alter ego.  Think about this for a second:  Hillary Clinton cannot let go of the fact that she was beaten by Donald Trump with an ugly stick of truth and consequences.  George Soros won't back down from his 200+ organizations that are well-endowed with his cash (cleanly laundered through the endeavors of the Democratic National Committee, of course) and filtered down into one main goal:  Kill Donald Trump…figuratively for sure and possibly literally.

This pair of diabolical creatures is working claw-in-talon to bring down the Trump presidency in any way, shape or form, no matter how illegal, so long as they can begin anew their sinister quest of the ruination of America.

Soros has been involved in many front companies with different catchy designations to score points for the Leftist globalist agenda, at one point tallied with care to 187!  Hillary Clinton, the Beastette, has been involved in many front endeavors to score points for the Leftist agenda to destroy Trump's credibility and legitimacy.  Remember Bob Creamer, her toady who worked through a sub-basement shadow group (ostensibly to protest Trump) but in actuality was the pre-Antifa movement that was literally paying homeless men and young Communists to disrupt Trump rallies and start fights, news cameras in their wake waiting to capture the violence and blame Trump's rhetoric?

Soros has been caught listing jobs on craigslist at $16 an hour to disrupt Trump rallies!  Hillary Clinton has been caught having enlisted and paid for Fusion GPS turncoat Christopher Steele to concoct a massive piece of fiction about Trump and Russia called the Dossier!

In my opinion, these monsters are two halves of a hideously disfigured Beast that cannot and will not concede that they have both been rejected by America and no longer have a home in this country!  Turn to the next page to read further about how Soros has been investing in a fake filmmaking group that stands for nothing more than the execution of Plan 666:  Kill Donald Trump!