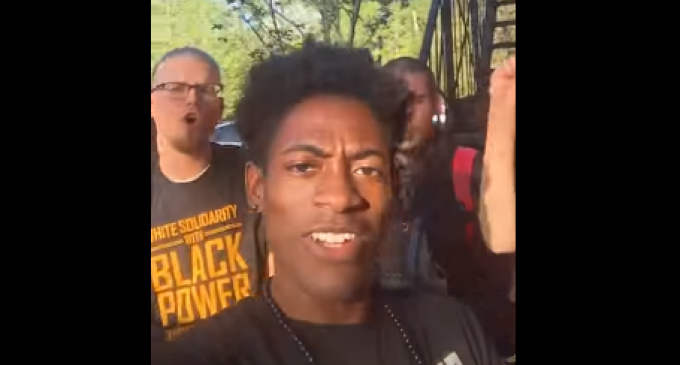 Liberals seem to find all manner of ways to feel guilty about their achievements and success, and the Black Lives Matter (BLM) movement plays on that white, liberal guilt. There is another group that is gaining traction, and it is even more preposterous than the BLM movement.

It is called the Uhuru Solidarity Movement, and it is an organization of white people created to work under the direction of the African People's Socialist Party (of course), and has the goal of “liberating Africa and African people everywhere,” as well as demanding reparations for slavery that existed in the United States more than one hundred and fifty years ago. The video on page 2 demonstrates what the group is promoting.

It is not clear if Bernie Sanders supports this socialist offshoot,  but as with virtually all socialist organizations, it seeks to divide the country by class and then to claim that they merely want equality and “fairness,” though it is actually seeking to create a new, privileged ruling class. In searching the Uhuru website, you can find out about how donations are spent but it does not include information on salaries paid to the leadership.

Be that as it may, demand for reparations seems to be a fetish that many in the black community cannot let go of. There are many reasons why reparations are unlikely, and they include the following:

Slave traders were primarily Arab, and they bargained with African princes and war lords to obtain their human cargo. It was not a “white” or European initiated activity.

Slave trading was practiced throughout the world, and in fact is still practiced in some African and Middle East nations. Most slaves ended up in Latin America, not the U.S.

Only 6% of southern states residents were slave holders, and only 1.6% of the entire nation.

Most African Americans are not descendants of slaves.

Conditions varied widely from owner to owner, and few found it beneficial to maim or torture their valuable help.

What many would now claim were inhuman conditions, were simply the general conditions under which ordinary people lived. Slaves did not have air conditioning, for instance, but then again, neither did anyone else. A dirt floor cabin seems horrendous to us today, but not to those who lived 160 years ago.

It is also well known that a black student seeking an education at an Ivy League university will have a much easier time gaining entry, with lower grades and SAT or ACT scores and fewer social and community achievements required, simply because of their ethnicity. And certainly many businesses also lower the bar in hiring.

In fact, it is clear that an African American student who applies himself or herself in school and stays out of trouble will actually have a much easier time when applying for advanced education and jobs than someone who is not “burdened” by the legacy of slavery.  However, there are elements that hold back African Americans, including their extremely high incidence of legal infractions (black young men, comprising perhaps only 3% of the U.S. population annually commit over 50% of U.S. homicides), drug usage, and sociologically, the very damaging problem of out of wedlock births and the lack of fathers in the home. That is certainly a cause of poverty and instability in black culture. But there are those in the African American community who insist that the real cause for blacks being held back is racism and the lack of opportunity for blacks in our society. It would be much more productive if they spent less time playing the blame game, and more time trying to correct the issues in their communities.

The following video, however, shows confused and ill-informed non-blacks accepting the blame for black failure, and promoting the idea of black reparations. It is indicative of our poor public education which preaches this nonsense provided by their socialist masters.