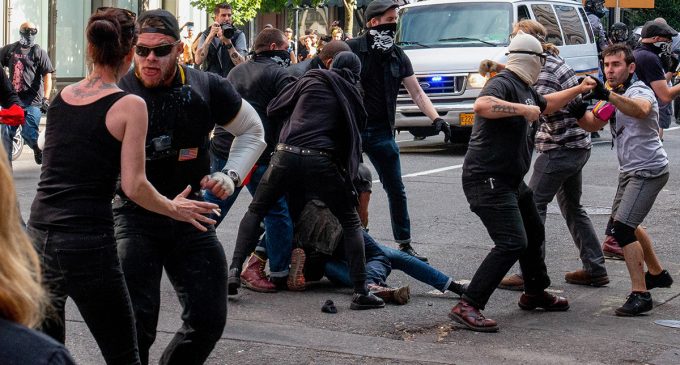 Gunshots rang out in Downtown Portland on Sunday as Proud Boys and Antifa Clash clashed in open combat. Multiple videos were posted by journalists showing the violence breaking out between hundreds representing the two groups.

One man is in police custody after firing at apparent counter-protesters during the Proud Boys rally. The firefight took place in downtown Portland shortly after 6pm. Members of Antifa followed the man until he took cover behind a solar-powered trashcan, produced a handgun and opened fire. He fired at least two shots before Antifa members returned fire.

Breaking: Shots fired during clashes between Proud Boys and Antifa in Portland, Oregon. There are no reports of anyone hit by gunfire. pic.twitter.com/iZ8AMN0bvm

“We are dedicated to keeping the peace. Our ask is simple: We are asking you to choose love,” Mayor Ted Wheeler said during a Friday afternoon press conference. “People should not necessarily expect to see the police standing in the middle of the crowd trying to keep people apart. People need to keep themselves apart and avoid physical confrontation.”

Move to the next page for more videos of the clash.