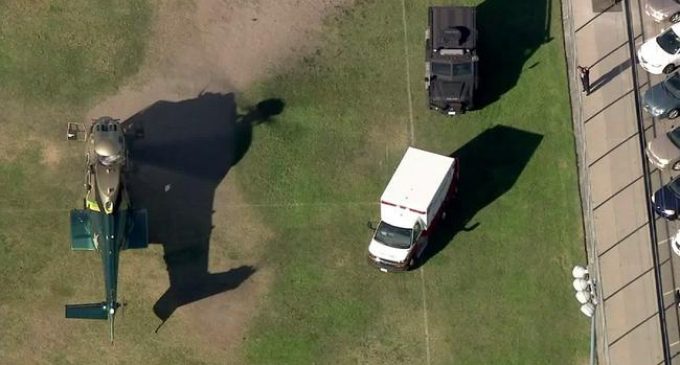 One person has been killed and at least three others were wounded on Tuesday in a shooting near a polling station in Azusa, California

Very few details have been released about the shooting, which began sometime after 2 p.m.

At this time it is unknown if the shooting is related to the presidential election.

(CNN)
Two voters who were inside the Memorial Park North Recreation Center when the shooting occurred spoke to CNN on the condition of anonymity.
Azusa is located roughly 30 miles outside Los Angeles.
One male voter says he was inside when he heard a bunch of shots ring out and people from outside starting to run in before officials locked the doors. He told CNN a “massive shooting is happening and the police have told us to stay indoors. We are currently on locked down.”
A female voter told CNN she heard the shots ring out.
“At first, I thought it was construction but people came running into the room saying they see a guy with a bulletproof vest and a white shirt. As of right now, they just have us in the voting room and are trying to keep us calm.”
The female voter said officials are not allowing anyone to leave the building but people are still allowed to vote while they wait. She said officials are not announcing updates inside in order to not scare the kids.
Pictures sent to CNN from inside the polling station show many people inside, including a group of children who were in the building when the shots rang out.
The female voter said she estimates about 30 people remain inside the locked down polling location. Additionally, about 15-20 children were evacuated from a gym inside the recreation center where the voting station was located.
The shots were not inside the polling station.
The LA County Sheriff's Department is assisting the Azusa Police Department with the officer-involved shooting, Sgt. Vincent Plair told CNN.
A Los Angeles County Sheriff's Department helicopter has transported at least two shooting victims to a nearby hospital.