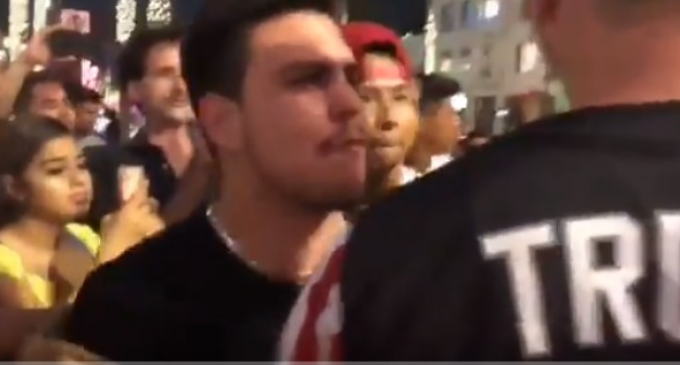 A brawl broke out near the Trump Hollywood Walk of Fame star this Thursday when a Marine veteran and pro-Trump journalist wearing full MAGA gear were attacked by a leftist mob.

The video shows an enraged man, who appears to be Hispanic, getting in the face of journalist Elijah Schaffer, who was accompanied by singer Joy Villa and the veteran. The angry man continued to repeat the phrase, “I can say nigger if I want to” twice before Schaffer tells the man to “get out of my face.

The anti-Trump zealot threw the first punch at the veteran after which another man involved in the first confrontation physically assaulted the veteran and Schaffer.

Other anti-Trumpers join in the fray, even attacking a man filming the fight.

See video of the confrontation taken by Joy Villa, who wore a “Make America Great Again” dress at the 2017 Grammys, on the next page: