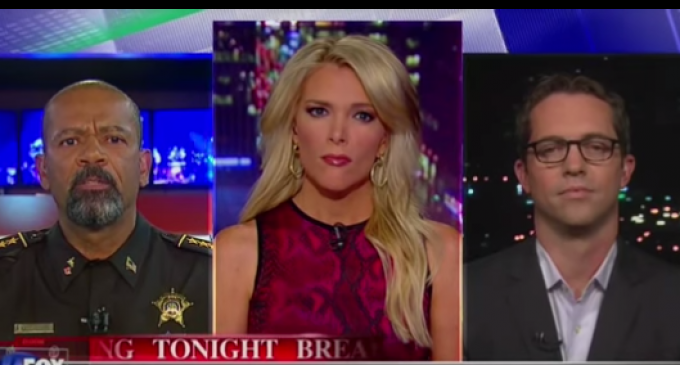 On the Megyn Kelly Show, Sheriff Clarke (Milwaukee County) appeared with a left leaning “gun control” advocate to debate the issue of how to stop mass shootings.  The leftist , Jeremy Bird, who served as an Obama staffer on his last election, mimicked Obama’s no solution answer.  Obama in remarks last week, laughed at conspiracy theory’s that concerned him, stating that “some people think its some plot to keep me in power, even those on the other side (GOP) in power seem to think that also”.

Obama, and Jeremy Bird have no real solution.  They talk about stricter “gun control” but what does that mean?  In liberal state’s like Illinois and California, which imbibe some of the strictest laws, also have the most gun violence in the inner cities of Chicago and Los Angeles.  When the “gun free zones” are brought up in the debate, Sheriff Clarke says its those very zones which are the dangerous.

Clarke has his own take on the gun situation, which flies in the face of what Obama and Bird have in mind.

Video on Clarke’s take on lowering mass shootings next page