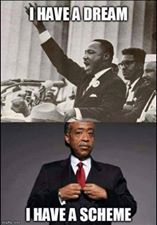 Tax cheat Al Sharpton has made his money throughout the years doing something that would jail the rest of us: extortion.

Peddling influence, Sharpton financially blackmailed corporations for him to not only influence the black community in their favor, but to not give them bad publicity by publically labeling them as racist.