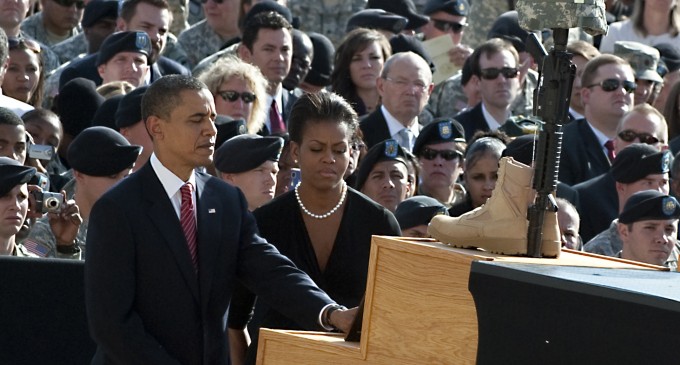 Sgt. Isaac Shawn Sims, a 26-year-old, third generation army veteran who served two tours of duty in Iraq, died in a gunfight with police this past weekend – he was diagnosed by the VA as having severe PTSD, yet not given treatment.

Earlier this month Senator Dianne Feinstein (D-California) stated that vets shouldn't own firearms because they could have PTSD, yet the VA isn't treating them properly when they return home.

It's all too obvious that the Obama administration is waging war on our vets and active military, as well-outlined in an article by Constitutional Attorney Michael Connelly, an excerpt is below the video.

As for our government, we have a President of the United States, an administration, and a Congress that seems intent on breaking the morale of our soldiers and destroying their capability of protecting our nation. Their actions support the fact that there is an all-out assault on both our active duty military and our veterans. The elements of this assault consist of:

I could go on with this list because it just scratches the surface. Our military members and our veterans are being hammered by the government they have fought for. They are being denied the medical care they were promised, the respect they are due, and ultimately the constitutional rights they have been defending. Enough is enough, if we allow our military and veterans to be treated this way, how can we expect the government not to turn on all of us.