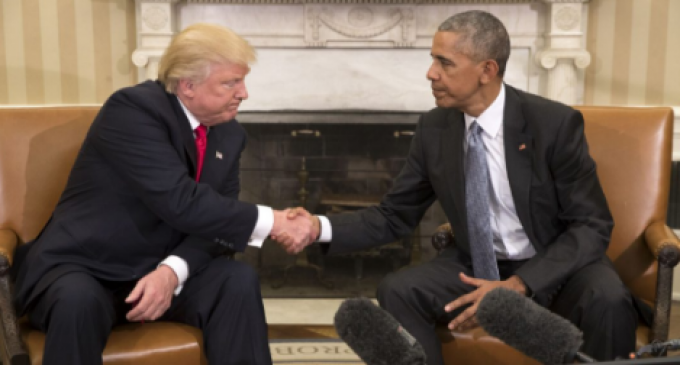 If anyone still thinks that there will be a normal,  smooth transition of power from Mr. Obama to Mr. Trump, then any such individual is just not paying attention at all.  Naturally, there will be attempts to downplay any conflicts, but the tension remains.

The unpleasantness that surrounds this transition is rather obvious, and largely stems from its impact on Mr. Obama's legacy. He is clearly unhappy that Mrs. Clinton lost the race. Whether he actually likes the woman or not is debatable, but at least she would not have taken a wrecking ball to his legacy. On the other hand, Mr. Trump, understandably, has no use for much of what Mr. Obama has done in his eight years, and is eager to get to work undoing it. With that, there goes Mr. Obama's legacy.

Given that Mr. Obama is incensed that Donald Trump will replace him, it's not hard to imagine the man not only being uncooperative, but also taking deliberate actions to create problems for Mr. Trump — seven of which are discussed on page two.