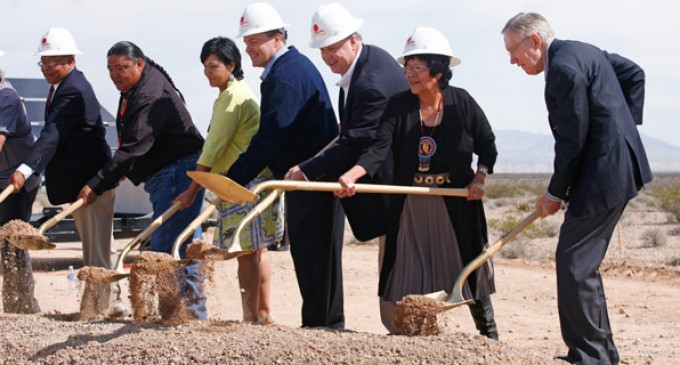 Senator Harry Reid wants Bundy out of the 600,000 acre Gold Butte area so it can be used for future solar projects, which includes a deal with the Chinese. The deal stretches across several states, not just this area in Nevada.

“[Reid] and his oldest son, Rory, are both involved in an effort by a Chinese energy giant, ENN Energy Group, to build a $5 billion solar farm and panel manufacturing plant in the southern Nevada desert,” wrote Reuters journalist Marcus Stern. “Reid has been one of the project’s most prominent advocates, helping recruit the company during a 2011 trip to China and applying his political muscle on behalf of the project in Nevada.”

Documents on BLM's website illustrated the planning, and were pulled off the site in an attempted cover-up. However the documents were retained by patriot site FreeRepublic.com. See these documents on our site.

Senate Majority Leader Harry Reid (D-Nev.), who was exposed last Friday as the mastermind behind the Bureau of Land Management’s persecution of Nevada rancher Cliven Bundy, can be seen in this March 2014 photo breaking ground for a solar farm near the Bundy Ranch, emphasizing that the senator’s plan for solar projects in Nevada wasn’t just limited to the shelved solar farm near Laughlin.

Signaling the first day of construction of the Moapa Southern Paiute Solar Project, which is about 35 miles from the Bundy homestead in Bunkerville, Nevada, Sen. Reid joined representatives from the Moapa Band of Paiutes, executives from First Solar, Inc. and the Los Angeles Department of Water and Power for the groundbreaking ceremony on March 21.

“First Solar is thrilled to celebrate this important milestone with Sen. Reid and distinguished guests, and honored to work with the Moapa Band of Paiutes on this landmark project,” Jim Hughes, the CEO of First Solar, said at the time.

The development of solar farms just as this one is exactly why Sen. Reid was using the BLM, whose director is Reid’s former senior advisor, to push Bundy out of the Gold Butte area his family has worked for over 140 years.

As we revealed last Friday in an article that became the #1 news story in the world for 24 hours, the BLM specifically stated that it wanted Bundy and his cattle out of the area as part of the agency’s “regional mitigation strategy for the Dry Lake Solar Energy Zone.”

The BLM attempted a cover-up by deleting documents exposing the plan from its web site, but fortunately contributors at the Free Republic were able to save them for posterity.

Others have attempted to whitewash the situation by suggesting that the solar farm project is only limited to the shelved 2012 deal between Sen. Reid and Chinese-owned ENN Energy Group in Laughlin, Nev., but by reading the BLM’s own documents it is quite obvious that this is not the case.

“The BLM’s current action builds on the Western Solar Energy Plan, a two-year planning effort conducted on behalf of the Secretary of the Interior and the Secretary of Energy to expand domestic energy production and spur development of solar energy on public lands in six western states,” the BLM announced in a March 14 press release. “The Western Solar Energy Plan provides a blueprint for utility-scale solar energy permitting in Arizona, California, Colorado, Nevada, New Mexico and Utah by establishing Solar Energy Zones with access to existing or planned transmission, incentives for development within those Solar Energy Zones, and a process through which to consider additional Solar Energy Zones and solar projects.”

“The Regional Mitigation Strategy for the Dry Lake Solar Energy Zone is the first of several pilot plans to be developed by the BLM,” the press release added.

In summary, the BLM, acting under Sen. Reid’s corrupt interests, wants Cliven Bundy out of the 600,000 acre Gold Butte area so the agency can use the land for future solar projects and de facto buffer zones surrounding the solar farms. 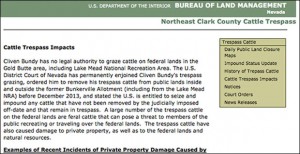 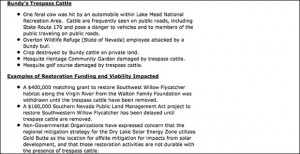