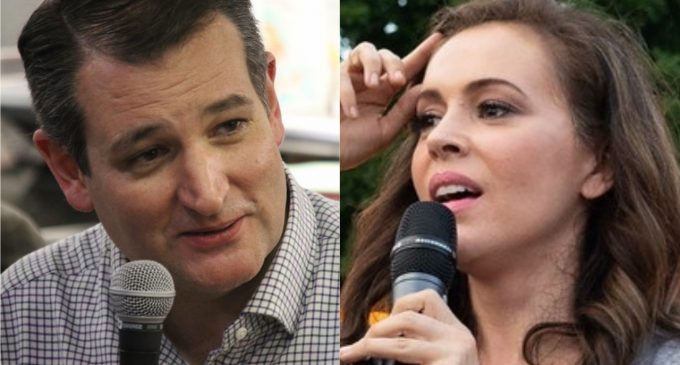 In boxing an mixed martial arts it's called a ‘mismatch' when one opponent holds great advantage over another. Actress and singer Alyssa Milano really brought a mismatch upon herself after challenging Sen. Ted Cruz (R-TX) to debate gun violence and the Constitution – she says will expose his “bullshit” to the American people.

Cruz has officially accepted Milano’s challenge and the two will hold a live-stream debate, a request of Milano, next week while the activist visits D.C.

“I’d be happy to sit down & visit next week about uniting to stop gun violence & about the Constitution. If we can have a civil & positive conversation—in the spirit of 1 Peter 4:8 as you suggest—despite our political differences, that might help resolve the discord in our Nation,” Cruz said Monday evening.

The actress quickly fired the first salvo, apparently not able to hold off till the debate.

She tweeted: “Can someone cite which passage of the Bible God states it is a god-given right to own a gun? This guy is unbelievable and is clearly owned by the gun lobby.”

Cruz responded: “An excellent Q, worth considering carefully w/o the snark of Twitter. It is of course not the right to a modern-day firearm that is God-give but rather the right to Life & the right to Liberty. Essential to that right to life is the right to DEFEND your life & your family,” Cruz began.

What a debate this will be! Milano's arrogance that she can hold her own with Sen. Cruz will certainly prove to be a debacle for the Left.