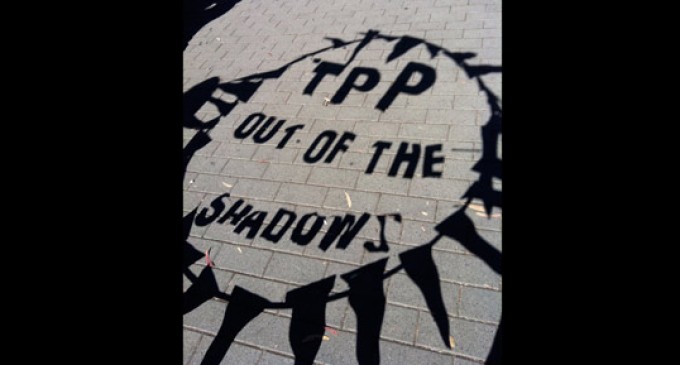 November 19-24 the Trans-Pacific Partnership (TPP) organization will meet in Salt Lake to continue discussions that are set to affect internet freedom, medicine, patent law, civil liberties and even national sovereignty. Documents released by Wikileaks indicate the ‘trade agreement’ includes provisions for a transnational “enforcement regime” which will override national laws, replacing them with global regulations under the direction of corporate interests.

Why isn’t your representative doing anything about this so-called trade agreement? Partly it is due to the veil of secrecy surrounding the TPP. Delegates are hand-picked from advisers and lobbyists for corporations and include no members of congress. In fact the Obama administration has listed information pertaining to the TPP as classified information. Congressman Alan Grayson managed to gain access to some of the the details only after filing requests under the Freedom of Information Act (FOIA), but due to the classified designation, he is not permitted to talk directly about what he read.

The draft text for the TPP Intellectual Property Rights Chapter spells out provisions for implementing a transnational “enforcement regime” designed to supplant national laws and sovereignty with a globalist construct. The TPP is by far the largest and most oppressive economic treaty devised thus far. It will have an impact on a staggering 40 percent of worldwide GDP. The TPP is the forerunner to the equally secret US-EU Transatlantic Trade and Investment Partnership (TTIP). Both treaties combined will cover 60 percent of world GDP and exclude China.

Enforcement will be accomplished by “supranational litigation tribunals to which sovereign national courts are expected to defer.” According to the document, the globalist courts can conduct hearings with secret evidence.

In addition, aspects of the treaty resemble SOPA and ACTA treaties with draconian surveillance mechanisms. In early 2013, thousands of websites “went black” to show solidarity in opposition to SOPA, or the Stop Online Piracy Act, legislation that seriously threatened the functionality of the internet. “SOPA was an attempt to put the power of information back in the hands of an elite few who are rapidly losing the ability to control what the masses are reading, hearing and seeing,” Mac Slavowrote in January, 2012.

“Since the beginning of the TPP negotiations, the process of drafting and negotiating the treaty’s chapters has been shrouded in an unprecedented level of secrecy,” Wikileaks notes in a statement on the release of the TPP draft. “Access to drafts of the TPP chapters is shielded from the general public. Members of the US Congress are only able to view selected portions of treaty-related documents in highly restrictive conditions and under strict supervision. It has been previously revealed that only three individuals in each TPP nation have access to the full text of the agreement, while 600 ’trade advisers’ – lobbyists guarding the interests of large US corporations such as Chevron, Halliburton, Monsanto and Walmart – are granted privileged access to crucial sections of the treaty text.”

So with all the apparent drawbacks with the agreement, why is President Obama set to fast-track approval of the treaty? If the partnership holds hidden benefits for America is it not in the administration’s interest to dispel fears and speculation created by this cloak of secrecy?

“The US administration is aggressively pushing the TPP through the US legislative process on the sly,” said Wikileaks editor Julian Assange.