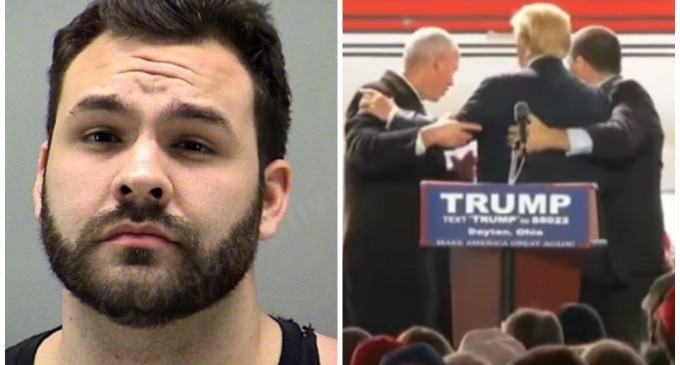 On the heals of the cancelled rally in Chicago, where protesters were raucous and tensions high, Trump had a brush with violence in Dayton, Ohio.  Secret Service jumped into action, creating a wall around Trump as the man, now known to be Thomas Dimassimo, rushed the stage.

Trump was visibly shaken in the midst of the incident and the crowd responded with equal angst, chanting, “Trump, Trump, Trump”.

Montgomery County Sheriff, Phil Plummer said that Dimassimo has been charged with “inducing panic and disorderly conduct”.  He “attempted to breach the secure buffer and was removed rapidly and professionally,” a campaign spokeswoman stated.

Dimassimo has been called a professional protester.  He is featured in a #notmyflag video, supporting Black Lives Matter and far-left Wright State student.  It appears that his Twitter account, Marlon Bando, has been deleted, but not until one of his tweets had been archived.  Check out more about Dimassimo on the next page, his #notmyflag video and his attack on Trump.