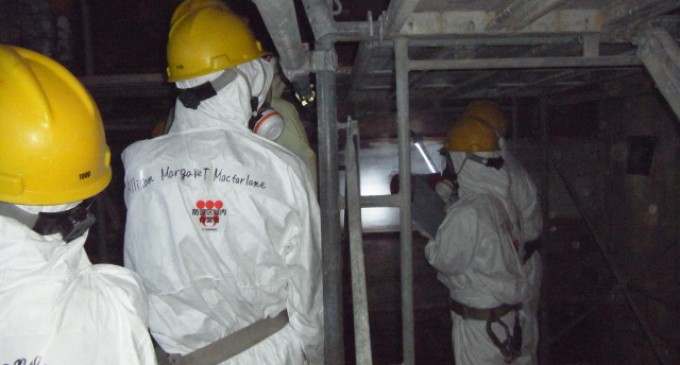 He also says that says he’s seen a paper that says that if – in fact – the 4th reactor comes down, “it’s bye bye Japan, and everyone on the West Coast of North America should evacuate.

This is beyond scary. Japan and Tepco for years have covered up just how dangerous the situation has been, how much radiation has gotten out and how much they could not handle the crisis.

I highly recommend you purchase nacient iodine to protect your thyroid in the event things don't go ‘as planned' when moving these rods. However, if things go too far astray, even that won't be enough.

God help us all.

We’ve long said that the greatest short-term threat to humanity is from the fuel pools at Fukushima.

The Japanese nuclear agency recently green-lighted the removal of the spent fuel rods from Fukushima reactor 4′s spent fuel pool. The operation is scheduled to begin this month.

The head of the U.S. Department of Energy correctly notes:

The success of the cleanup also has global significance. So we all have a direct interest in seeing that the next steps are taken well, efficiently and safely.

If one of the pools collapsed or caught fire, it could have severe adverse impacts not only on Japan … but the rest of the world, including the United States. Indeed, a Senator called it a national security concern for the U.S.:

The radiation caused by the failure of the spent fuel pools in the event of another earthquake could reach the West Coast within days. That absolutely makes the safe containment and protection of this spent fuel a security issue for the United States.

Award-winning scientist David Suzuki says that Fukushima is terrifying, Tepco and the Japanese government are lying through their teeth, and Fukushima is “the most terrifying situation I can imagine”.

Suzuki says that he’s seen a paper that says that if – in fact – the 4th reactor comes down, “it’s bye bye Japan, and everyone on the West Coast of North America should evacuate. Now if that’s not terrifying, I don’t know what is.”

The operator of Japan’s crippled Fukushima nuclear power plant … will begin a dry run of the procedure at the No. 4 reactor, which experts have warned carries grave risks.

“Did you ever play pick up sticks?” asked a foreign nuclear expert who has been monitoring Tepco’s efforts to regain control of the plant. “You had 50 sticks, you heaved them into the air and than had to take one off the pile at a time.

“If the pile collapsed when you were picking up a stick, you lost,” he said. “There are 1,534 pick-up sticks in a jumble in top of an unsteady reactor 4. What do you think can happen?

“I do not know anyone who is confident that this can be done since it has never been tried.”

Experts around the world have warned … that the fuel pool is in a precarious state – vulnerable to collapsing in another big earthquake.

Yale University professor Charles Perrow wrote about the number 4 fuel pool this year in the Bulletin of Atomic Scientists.

“This has me very scared,” he told the ABC.

“Tokyo would have to be evacuated because [the] caesium and other poisons that are there will spread very rapidly.

Conditions in the unit 4 pool, 100 feet from the ground, are perilous, and if any two of the rods touch it could cause a nuclear reaction that would be uncontrollable. The radiation emitted from all these rods, if they are not continually cool and kept separate, would require the evacuation of surrounding areas including Tokyo. Because of the radiation at the site the 6,375 rods in the common storage pool could not be continuously cooled; they would fission and all of humanity will be threatened, for thousands of years.

Former Japanese ambassador Akio Matsumura warns that – if the operation isn’t done right – this could one day be considered the start of “the ultimate catastrophe of the world and planet”:

(He also argues that removing the fuel rods will take “decades rather than months.)

Nuclear expert Arnie Gundersen and physician Helen Caldicott have both said that people should evacuate the Northern Hemisphere if one of the Fukushima fuel pools collapses. Gundersen said:

Move south of the equator if that ever happened, I think that’s probably the lesson there.

We are now within two months of what may be humankind’s most dangerous moment since the Cuban Missile Crisis.

Should the attempt fail, the rods could be exposed to air and catch fire, releasing horrific quantities of radiation into the atmosphere. The pool could come crashing to the ground, dumping the rods together into a pile that could fission and possibly explode. The resulting radioactive cloud would threaten the health and safety of all us.

A new fuel fire at Unit 4 would pour out a continuous stream of lethal radioactive poisons for centuries.

Former Ambassador Mitsuhei Murata says full-scale releases from Fukushima “would destroy the world environment and our civilization. This is not rocket science, nor does it connect to the pugilistic debate over nuclear power plants. This is an issue of human survival.”

Even the head of Japan’s nuclear agency is worried.  USA Today notes:

Nuclear regulatory chairman Shunichi Tanaka, however, warned that removing the fuel rods from Unit 4 would be difficult because of the risk posed by debris that fell into the pool during the explosions.

“It’s a totally different operation than removing normal fuel rods from a spent fuel pool,” Tanaka said at a regular news conference. “They need to be handled extremely carefully and closely monitored. You should never rush or force them out, or they may break.”

He said it would be a disaster if fuel rods are pulled forcibly and are damaged or break open when dropped from the pool, located about 30 meters (100 feet) above ground, releasing highly radioactive material. “I’m much more worried about this than contaminated water,” Tanaka said

A task of extraordinary delicacy and danger is about to begin at Japan’s Fukushima nuclear power station.

One senior official told me: “It’s going to be very difficult but it has to happen.”