Goodin stated that parents had not been actually been consulted about their children being microchipped – that her son came home stating that he had his wrist measured at school on Monday for the bracelet microchip.

“I don't like the idea of my children being scanned,” Goodin said.

The tracking of people will only end up with devastating consequences for everyone until we as a people root out evil or at least find a way to keep it out of government.

Teachers would use portable scanners to add points to a student's online good behaviour chart with a reward when a certain amount of points was accumulated.

The school says the scheme would cost $7000 to set up. The proposal has been opposed by some parents.

The Ministry of Education said it did not recommend the bracelets and would expect broad parent support before it was adopted by the school.

Mother Liz Rutherford said she heard about the scheme “on the rumour mill” and feared it was a slippery slope. “If it's just for good behaviour, why would you invest that much money in it?”

Rutherford said she would remove her children from the school if the bracelet scheme went ahead.

Acting principal Kate McClelland said no decisions had been made about the bracelets. “Everyone's viewpoints will be considered.”

After the school was approached by The Press, parents received a letter about the proposed new system.

In it, McClelland said the bracelet system was an alternative to a previously proposed electronic card that students could lose.

The microchip would store the child's first name, surname initial, points tally and the school house they belonged to. It would not have GPS tracking installed and bad behaviour would not be tracked.

New Zealand Principals' Federation president Phil Harding said regardless of whether the system was a good or bad idea, the school needed to communicate with parents.

Harding said each school had to make decisions about controlling student behaviour themselves and deal with the consequences.

Privacy Commissioner John Edwards said community consultation was essential when introducing new technology that could have privacy implications for a school. 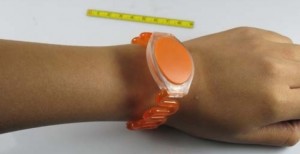