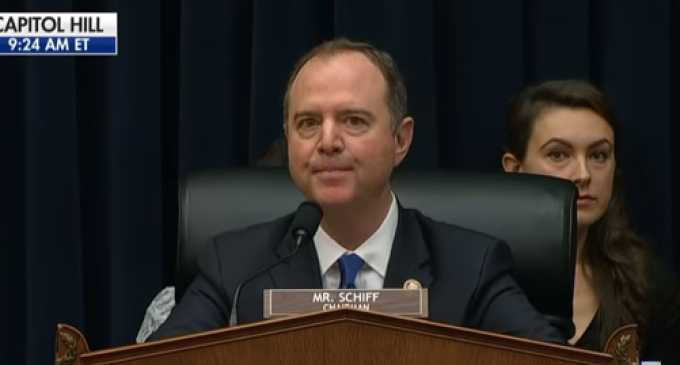 Nine Republicans on the House Intelligence Committee meeting unveiled a letter Thursday that demanded Democratic Chairman Adam Schiff resign his role over the unrelenting fabrications he portrayed over the last couple years regarding the Russia investigations.

This comes just hours after President Trump called for Schiff to resign.

Congressman Adam Schiff, who spent two years knowingly and unlawfully lying and leaking, should be forced to resign from Congress!

The letter states that Attorney General William Barr’s summary of Mueller’s report, which finds that the Trump campaign did not collude with Russia to influence the 2016 election, “conclusively” refutes Schiff’s past and present claims.

Your willingness to continue to promote a demonstrably false narrative is alarming. The findings of the Special Counsel conclusively refute your past and present assertions, and have exposed you as having abused your position to knowingly promote false information.

Having damaged the integrity of this committee, and having undermined the faith in the United States government and its institutions, your actions both past and present are incompatible with your duty as chairman of this committee, which alone in the House of Representatives has the obligation and authority to provide effective oversight of the U.S. intelligence community.

As such, we have no faith in your ability to discharge your duties in a manner consistent with your Constitutional responsibility and urge your immediate resignation as Chairman of this Committee.

Nine members of the House Intelligence Cmte have just called for Chairman Adam Schiff’s “immediate resignation as chairman of the committee.” For two years he misled the public on collusion, and the American people no longer have faith in his ability to lead. He should step down. pic.twitter.com/QecxGGeopt

But Schiff fought back against GOP members with a lengthy rant consisting of his past falsehoods. Rep. Mike Turner (R-OH) asked to refute the chairman’s baseless claims and the two started to argue whereupon Schiff cut off Turner's microphone!