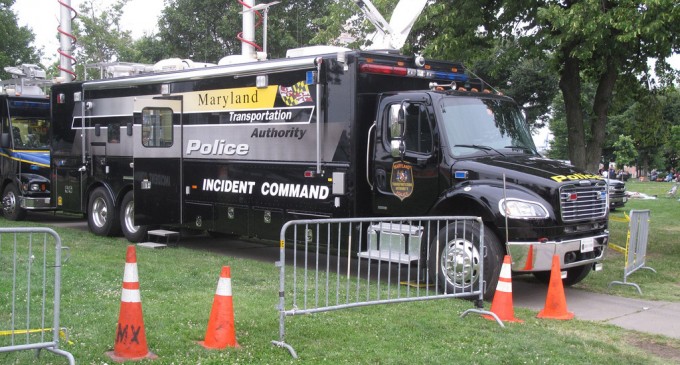 The Federal government has an illegal national registry of gun owners and is sharing that information with local police.

When John Filippidis, a Florida resident, was traveling through Maryland earlier this year he was stopped by a officer from the Maryland Transportation Authority Police (MTAP), who after 10 minutes on the radio knew he had a concealed carry permit from Florida.

Filippidis left his gun at home, in honor of the gun laws in other states, and stated this to the officer. However, his wife stated ‘it might be in the glove box', which resulted in a 90 minute search of his car.

The officer called Mr. Filippidis a ‘liar' and ripped through everything “riders, luggage, Christmas gifts, laundry bags,” and all.

It is against federal law to have a national gun registry, yet here is, once again, proof that the federal government is lawless and intent on disarming Americans.

When Floridian concealed carry permit holder John Filippidis and his family drove through Maryland on their way to New Jersey for Christmas, he was pulled over by the Maryland Transportation Authority Police (MTAP), accused of having a gun, humiliated, and searched along with his car and family.

According to The Tampa Tribune, Filippidis normally carries a Kel-Tec semi-automatic pistol for concealed carry. But knowing the gun laws in Maryland and New Jersey, he decided to leave it at home in his safe instead of bringing with him on the trip.

Said Filippidis: “I know the laws and I know the rules, but I think it's a better idea to leave it at home.”

While driving through Maryland, he was pulled over by a MTAP officer who asked for vehicle license and registration, then went back to the patrol car. “Ten minutes later” the officer came back to the driver's window, asked Filippidis to exit the Ford Expedition and took him behind the vehicle to ask where his gun was.

Filippidis told the officer he left it at home in a safe.

The officer then walked up to the passenger window and asked Filippidis' wife where the gun was, and she said: “I don't know… Maybe in the glove [box]. Maybe in the console. I'm scared of it.”

Following this, the Tribune says the officer returned to Filippidis, called him “a liar,” then spent roughly 90 minutes searching the car for a gun that wasn't there. This meant emptying the car of its contents—”riders, luggage, Christmas gifts, laundry bags,” and all.

After finding no gun, the officer issued Filippidis a warning and sent him on his way.

The officer's captain and “a Maryland Transportation Authority Police internal affairs captain” have since both apologized for the incident. Filippidis has not decided yet what his next step will be.