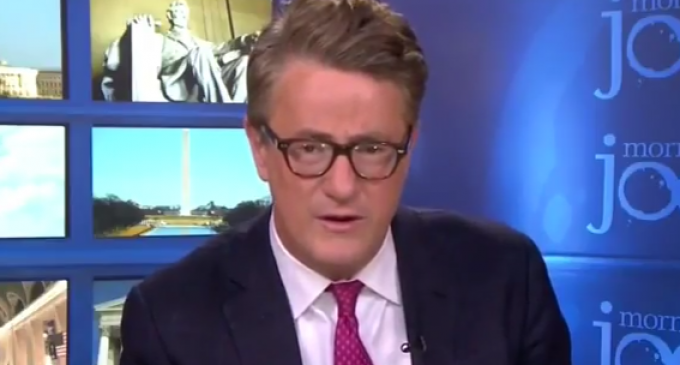 You know how you can tell that MSNBC's “Morning Joe” is tanking?  Just take a look at the antics that Democrat-Lite Joe Scarborough partakes in nowadays and it will tell you all you need to know about this emasculated other half of the Mika Brzezinski duo.

After dumping his wife and marrying the Liberal protester rich girl-turned-TV personality, with a combined IQ of 99, the two went on a mission of destroying their own credibility ([whispered] which never really existed) and chasing down the pipe dream of trash-talking the current administration.

When that didn't work, they turned on the victim waterworks, attempting to paint Trump as an insensitive misogynist for his Mika face-lift tweet.

When that didn't work, Mrs. Brzezinski (that would be Joe) decided to pull the oft-used prank by Democrats pretending to be Republicans of threatening to “pull out of the party!”  Oh, I've got heart-flutters!  Dear me, whatever will we do without Joe Brzezinski?

Now, because that also failed dismally, he's upping the ante by showing how dedicated he really was to leaving the party!  Turn to the next page to see his latest tweets on becoming a registered Independent AND starting up a fake controversy that Trump was actually born in Nambia!