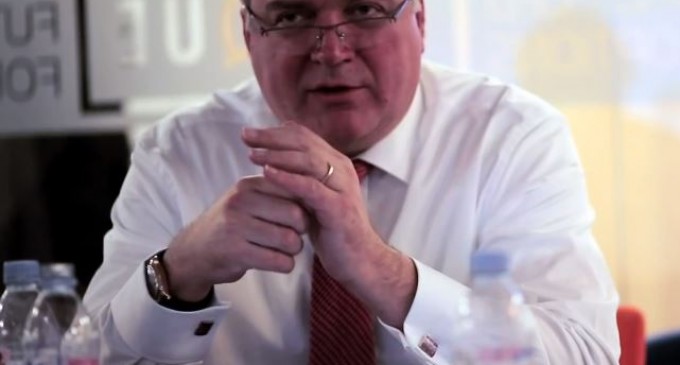 Saxo Bank CEO Lars Seier Christensen has issued a warning that that excessive government regulation, overtaxation and a coming economic collapse are all setting us up for a slide into an overtly totalitarian society.

In his blog, he outlines how the predictions of the 1957 dystopian classic Atlas Shrugged, are now coming true.

And we can see how our government has become a blatantly totalitarian regime, with our President continually violating the Constitution with very little opposition from Congress or the DOJ, the NSA spying on our every move, our rights being stripped away, a failing economy propped up by money printing and our borders eliminated with a failed illegal alien policy.

Order out of chaos – totalitarianism out of a failed state.

Saxo Bank CEO Lars Seier Christensen warns that excessive government regulation, overtaxation and a coming economic collapse are all setting the stage for a slide into an overtly “totalitarian” society.

In a blog post entitled, What is the broader relevance of Ayn Rand for society?, Christensen adeptly describes how the predictions of the author, most famous for her 1957 dystopian classic Atlas Shrugged, are now coming to pass.

The Saxo Bank CEO argues that free market capitalism and freedom in general is under constant attack by elites whose constant intrusions into the economy and people’s personal lives are predicated around the need to justify more centralization of power.

“First, the politicians assign ever greater powers to themselves, as they manage to convince the citizens of the need for even more interference, although the problems are created by interference in the first place,” writes Christensen, citing the European Union as an example of how, “one mistake invariably leads to call for even more powers, leading to new mistakes.”

The deliberate effort on the part of the political class to undermine and restrict freedom and free market capitalism prevents the system from working efficiently, “meaning that the underlying strength of human ingenuity and creativity is stopped from working and becomes increasingly powerless to pull us out of the morass we are in,” writes Christensen, adding that corporate fascism, or “business people using government favours in return for giving up their independence,” is another of Ayn Rand’s warnings that has come to pass.

“In fact, the undemocratic, power-grabbing, emotional, populistic Washington that takes over in Atlas Shrugged is today most closely resembled by the EU and the Eurozone in the real world,” asserts Christensen, adding, “We may have to go through a much more severe economic collapse before change will be forced upon us. Unfortunately, that change may also be totalitarian in nature, of course. In fact, that is the more likely outcome in the short run.”

A central theme of Christensen’s editorial is his assertion that politicians can only survive in an irrational society and therefore constantly need to create problems and then appeal to emotion and pose as the saviors in a bid to remain relevant and seize power.

“[The current irrational world] creates a major opportunity for politicians that intuitively know that in a rational world, there would be little demand for their services,” writes Christensen. “Only in an irrational, emotional universe, where opportunists can gain access to media and visibility to express “feelings” and try to take the moral high ground, no matter how unfounded in reality it is — only in such an environment can you survive without having to produce practical, productive results, and instead prosper and benefit from empty talk and third-rate acting performances.”

Christensen also highlights the fact that the increasing prevalence of onerous taxation policies, such as in France, are destroying businesses and jobs while forcing entrepreneurs to take flight – even to places like Russia – in a bid to find their own “Galts Gulch” where the free market is allowed to flourish and is not strangled by regulation and taxation.

“If we don’t succeed in changing the values and direction of at least the next generation, I fear the full prediction of Atlas Shrugged will become reality and while that may hold some promise for the distant future, it is not something that I think people of my age feel like going through if we can avoid it,” concludes Christensen.

Christensen’s blog post provides several real world examples that back up his argument and is a must read in order to understand how the political class seem to be using Atlas Shrugged as an instruction manual for a totalitarian takeover of society.