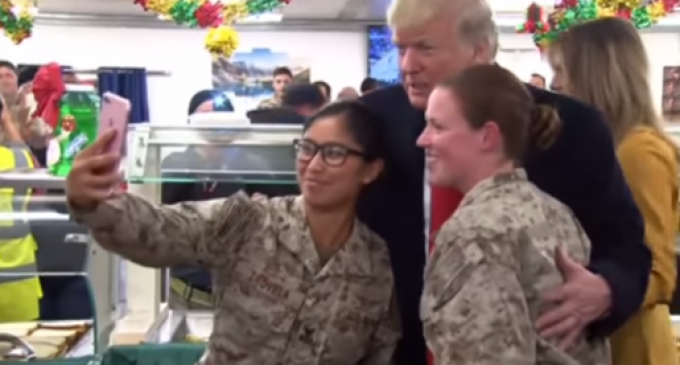 One can only imagine the shock and horror felt by the Left upon seeing our troops get their MAGA hats signed by our President. There is surely not a safe space empty tonight.

On Wednesday, President Donald Trump made a surprise visit to Iraq and received a very enthusiastic reception from US troops. This was certainly the first blow felt by the Left after the acrimonious media went on and on about how the President was the first since 2002 not to visit our troops during the holiday season. Yet there he appeared.

Then, when video footage showed the President signing “Make America Great Again” hats and an embroidered patch that read “Trump 2020,” that sent the entire liberal base into a complete meltdown. Punches hurt even more when you have egg on your face.

CNN was one of the first to sharply criticize the President and our troops by claiming that everyone had run afoul of military rules. Even though they acknowledged that a US military official told them the hats that Trump signed were personal and brought there with the simple hopes of getting an autograph, that the Trump admin had not distributed them, they were still military personnel participating in political activities while in uniform.

How dare our troops love their President!