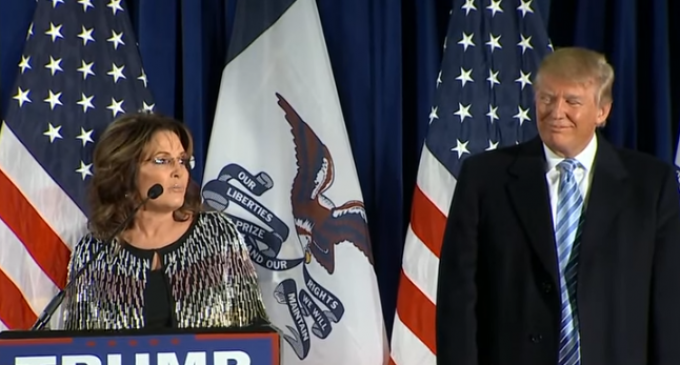 Donald Trump continues to win endorsement after endorsement, with his latest being a very prominent conservative figure.

As all eyes turn to Iowa, the Republican candidates all seek to make a strong showing in the battleground state. The first state to vote in the primary elections that will make or break their campaigns, it is very important for them to establish themselves as the most conservative candidate to voters. Part of the way they do this is secure endorsements from high-profile personalities, something that Trump handily pulled off this week.

Speaking directly from the Hawkeye State, former Alaska Governor and 2008 Republican running mate Sarah Palin unreservedly endorsed Trump. She made the remarks before a large crowd at Iowa State University, with the GOP frontrunner standing by her as she made her endorsement.

Palin's reputation among conservatives and evangelicals in particular will make this one of the most useful endorsements Trump could get. Her influence among the latter group in particular will be especially useful as he has been viewed suspiciously by some due to his old positions on issues like abortion and gun control.